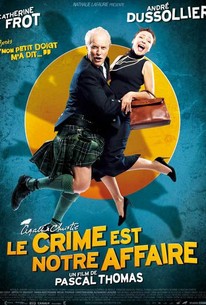 An adaptation of Agatha Christie's 1929 short story "The House of Lurking Death," this French-language whodunit represents director Pascal Thomas's third Christie adaptation, following the 2005 By the Pricking of My Thumbs and the 2007 Towards Zero; like Thumbs, it hones in on Prudence (Catherine Frot) and Belisaire Beresford (Andre Dussollier), a married pair of amateur sleuths. This particular outing is set at Christmastime, and finds the Rhone Alps-dwelling Beresfords visited by a beloved aunt, Auntie Babette (Annie Cordy), who promptly informs them that she spotted a murder through a rainy window while seated on a train. Eager for a new crime to solve, Prudence jumps into the case when Belisaire leaves town on a weekend jaunt, and makes her way to a creepy chateau in the middle of the forest, populated by the most unpleasant of families. Inhabitants include an eccentric patriarch widower named Roderick Charpentier (Claude Rich), his morose daughter Emma (Chiara Mastroianni), his conniving and paranoid sons (Christian Vadim, Alexandre Lafaurie and Melvil Poupaud), and a local country doctor (Hippolyte Girardot). Prudence takes a position as a cook at the residence, and when the body crops up, it soon falls on her shoulders to ferret out the murderer. Soon, her husband joins her at the house, tipped off by a local detective regarding his wife's whereabouts.

Joseph Proimakis
Movies for the Masses
View All Critic Reviews (1)

There are no featured reviews for Le Crime est Notre Affaire at this time.