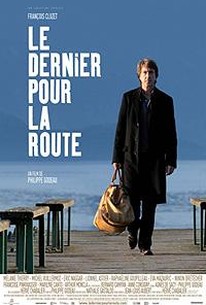 Interpreted in some quarters as a (very black) deadpan comedy and in others as a straightforward drama, this grim chronicle of life among alcoholics stars François Cluzet as Hervé Chabalier, a booze-happy journalist who checks himself into detox at a Swiss Alpine retreat, and both confronts the depths of his own helpless addiction and meets an offbeat cadre of residents. These include Magali (Melanie Thierry), a young but far-from-naïve minx with a weakness for vodka, and Pierre (Michel Vuillermoz) , prone to bouts of loudmouthed drunkenness.

There are no critic reviews yet for Le dernier pour la route. Keep checking Rotten Tomatoes for updates!

It's a 'good' movie, but it's not possible to create a connection if you're not an alcoholic or don't know anyone who is. Hervé's wife's visit is probably the most powerful scene. I also like the rapprochement with his son for not falling into an easy and "happy end".