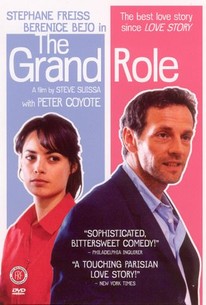 An actor who lands the role of his life is forced into an even greater real-life acting challenge in this comedy drama from France. Maurice Kurtz (Stéphane Freiss) is an actor who is passionately in love with his wife, Perla (Bérénice Bejo), and wishes he could provide a better life for her. Maurice and his friends Simon (Lionel Abelanski), Sami (Olivier Sitruk), and Edouard (Stéphan Guérin-Tillié) work for a company that dubs American films into French when they're not looking for acting work, and when they learn that famous American filmmaker Grichenberg (Peter Coyote) is coming to Paris to shoot a Yiddish-language version of +The Merchant of Venice, they all show up at a "cattle call" audition hoping to land bit parts. To his great surprise, Maurice's reading wins him the leading role of Shylock, and he quickly passes the good news along to Perla. As it happens, Perla needs some good news -- she's just been diagnosed with cancer, and her doctor tells her she's not long for the world. Maurice is comforted by the fact that his good fortune is lifting Perla's spirits, so when Grichenberg recasts him a few days later with a major American star, Maurice and his buddies devise a variety of scams to convince Perla that her husband is still making the movie that will make him famous.

Bereft of real laughs while lacking the depth to make its emotional aspects more moving, the film never manages to assimilate its shifting tones and ultimately seems trivial.

Their characters are compelling and completely realistic, the acting is first-rate, and many scenes in this black-and-white movie (which was shot in different countries, including Saudi Arabia) are breathtaking.

It's a weirdly winning illustration of love that O. Henry himself would have loved.

A touching Parisian love story about an actor and his dying wife.

...works as long as one doesn't think about it too much...

...a diverting little comedy/drama, with a good central performance from Freiss, but...nothing much more on display.

As in many of his films, Jaglom establishes a striking intimate rapport with his female subjects.

Funny, romantic and poignant all at the same time, Le Grand Role is quite a star.

There are no featured audience reviews yet. Click the link below to see what others say about The Grand Role (Le Grand Rôle)!