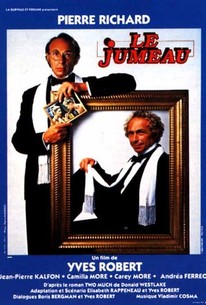 When a man decides to play the role of twins in order to romance another set of twins, life becomes much more complicated than he wants or needs in this interesting farce by Yves Robert, adapted from the much blacker comedy by Donald Westlake, Two Much. Matthias Duval (Pierre Richard) is a humble greeting-card vendor when he meets twin American heiresses and decides to seduce each of them since he cannot tell them apart anyway and is attracted to both sisters. His originally innocent ploy eventually makes a bigamist out of him and nearly does him in since he has to bed-hop between the two women, without remembering who is whom. The sisters' dirty-dealing lawyer finds Matthias out one day, and in the subsequent fight Matthias accidentally kills the man. Will this affect Matthias's relationship with both sisters? Will he be caught and go to jail? -- the answers are unexpected.

There are no critic reviews yet for Le jumeau (The Twin). Keep checking Rotten Tomatoes for updates!

There are no featured reviews for Le jumeau (The Twin) at this time.