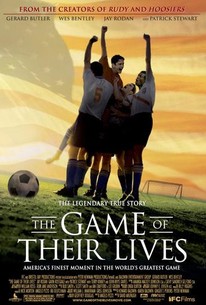 In 1950, most Americans had only a passing familiarity with the game of soccer, even though it was the world's most popular sport, and few athletes in the United States played the game with any particular degree of expertise. However, when an invitation was extended to the United States to participate in the World Cup tournament in Brazil -- the international soccer championship held every four years -- Bill Jeffrey was determined that America participate. In less than two weeks, Jeffrey assembled a team comprised mostly of players from St. Louis (where soccer had developed a small but loyal following) and the East Coast (where the game gained a foothold on college campuses), with immigrants from Haiti, Portugal, and Scotland filling out the ranks. Against all odds, the Americans not only made it to the World Cup games, but defeated the British team (favored by many to win the championship) in the greatest upset of the 1950 games. The Game of Their Lives is a sports drama based on the remarkable true story of the 1950 United States team, featuring John Rhys-Davies as Bill Jeffrey, Wes Bentley as team leader Walter Bahr, Gerard Butler as goalie Frank Borghi, Jimmy Jean-Louis as Joe Gaetiens, a dishwasher born in Haiti who found his way onto the team, and Patrick Stewart as a journalist covering the games. David Anspaugh, who made the acclaimed basketball drama Hoosiers, directed.

Director David Anspaugh has a skilled touch, but there's just not that much drama to film. This is a very competent, very predictable sports film.

...lacks even a penalty kick's worth of tension and is paradoxically inert for a movie about guys running up and down the pitch for the glory of the U.S.

These guys give a sport that is virtually nameless in the movies a good name in this one.

It's difficult to muster dislike for The Game of Their Lives, which is reasonably interesting, but it needed more grit and inspiration than this straightforward account can provide.

...this soccer tale is about as exciting to watch as a scoreless match between opponents so defense-minded the ball never gets beyond midfield.

the narrative and dialogue club us over the head in an effort to make 21st-century viewers understand why the victory of America's team over England was of such monumental importance.

A treat for soccer fans who have yet to see their favorite game given its due on the big screen. This won't be a classic soccer movie, but it's a start.

The Game of Their Lives takes a standard inspirational sports movie structure.

My problem with this movie is that the main actors are around 15 or 20 years older than the characters they are supposed to be playing. So they look like midlife people but they are dealing with issues as if they were fresh out of high school. I think they would have been better off casting it w/ college-aged soccer players. I am usually a big fan of movies like this one, but for some reason this movie didn't quite do it for me. It was ok. Extra 1/2 star for Gerard Butler and Gavin Rossdale...I do like them.

Nice flick, although I expected better soccer aptitudes from these 'athletic' actors. Stewart's imitation of an American accent was flawed in some moments, but still I admire his acting experience overall. Gavin Rossdale doesn't seem believable; perhaps he's better suited to writing simple grunge songs (a decade ago).