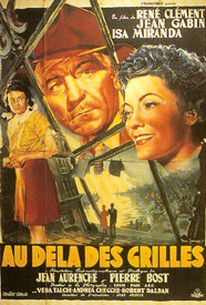 French filmmaker Rene Clement's international reputation was secured with Au Delades Grilles. A French-Italian production, the film sagaciously teamed the mostpopular stars of each nation: France's Jean Gabin and Italy's Isa Miranda. Gabin iscast as a murderer who escapes prosecution by stowing away on a ship. Suffering froma toothache, he disembarks in Italy in search of a dentist, only to have his fewpossessions stolen. This setback leads to an extended emotional interlude involvingGabin, a waitress (Miranda) and the waitress' daughter (Andrea Checchi). Whilekeeping in line with the realistic nature of Clement's postwar films, Au Dela desGrilles harks back to the more lyrical style of his prewar efforts.

It holds one engrossed, and tremendously moved.

There are no featured audience reviews yet. Click the link below to see what others say about Le Mura di Malapaga (The Walls of Malapaga) (Beyond the Gates)!