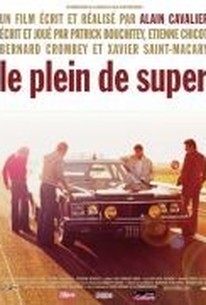 When a young auto salesman is forced to give up a vacation with his wife in order to drive an American car to its new owner who lives on the Riviera, he makes the best of things. First, he gets and old friend to ride along with him. Then, the two of them are joined by another pair of men who want to ride south. The four of them have a great time, talking about women and fatherhood, among other things. ~ Clarke Fountain, Rovi

There are no critic reviews yet for Le Plein de super (Fill 'er Up with Super). Keep checking Rotten Tomatoes for updates!

There are no featured reviews for Le Plein de super (Fill 'er Up with Super) at this time.