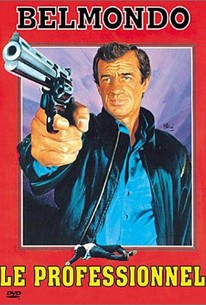 Joss Beaumont (Jean-Paul Belmondo) is a French spy given the assignment of killing an African dictator, and when he arrives in Africa to do so, he is captured and put in prison. The political winds had changed - the dictator is now an ally - and the best way to handle the agent is to keep him in jail. Naturally at odds now with his former bosses and with an ax to grind for his own incarceration, the agent escapes after two years in prison and heads back to Paris where he announces that he is going to finish his assassination job during the coming diplomatic visit of the African leader. Once aware of his intent, the French government sets up one trap after another, but to no avail - the agent remains free and there is no doubt that he has the full capacity to do exactly what he says. ~ Eleanor Mannikka, Rovi

Clearly one of Belmondo's best actioners, and a shining example of France's take on political thrillers and spy flicks.

It's hardly an espionage classic... but Belmondo is a magnetic rebel...

In "The Professional," Major Joss Beaumont(Jean-Paul Belmondo) is back in Paris, looking tan and fit, after two years away. Sadly, this was no vacation, as he was brutally imprisoned in Malagawi by President N'Jala(Pierre Saintons) for taking a shot at him under orders from the previous administration who disavowed him afterwards. So, you can understand why some of his former colleagues in the secret service are less than thrilled to see him back, except for Alice(Cyrielle Claire), especially considering his intent on finishing the job. "The Professional" gets off to an awful start that it could have probably done without before recovering nicely for a neat game of cat and mouse. The question here is who is the cat and who is the mouse? Even past his prime, Jean-Paul Belmondo still has it, even while contributing to some of the movie's roughness. That's not to say it does not have something valuable to say on the subject of national expediency, however.