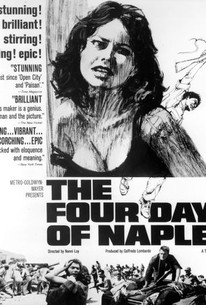 Italian resistance fighters engaged in bloody conflict against the Nazis in the four days preceding the arrival of Allied troops in Italy. Chaos reigns as the Germans pull away and loyalties are divided in the minds of the general populace. This is a rather historically inaccurate account as the Italians willingly surrendered to the Allies only in the wake of the Nazi army withdrawal. Although this effort is a gripping war film that captures the confusion and brutality of war, it is another transparent attempt by the Italian filmmakers to disavow their collaborations with the Nazis during World War II.

Pupella Maggio
as Mother of Arturo

Enzo Turco
as Valente
View All

It was certainly designed by [Loy] to make the older people of Italy feel again the fire of courage they felt in those dark moments, and to make the younger people know what it was.There isn't the slightest question that it accomplishes this intent.

Four Days of Naples is in almost all respects indistinguishable from so many other similar films on similar themes.

[A] history lesson embodied in this Italian opus, masterfully directed by a Sardinian named Nanny Loy...

This Oscar-nominated film recreates in a realistic, powerful way the Neapolitan resistance to the Nazis in 1943.

There are no featured audience reviews yet. Click the link below to see what others say about Le Quattro Giornate di Napoli (The Four Days of Naples)!