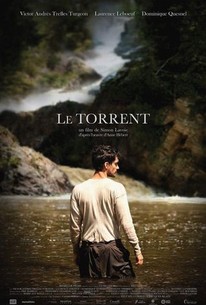 Simon Lavoie followed up his 2008 Le déserteur and 2011 Mathieu Denis collaboration Laurentia with this dark drama that explores the emotional and psychological impacts of draconian religious fanaticism. Working from the 1950 novella of the same title by acclaimed Quebecois writer Anne Hébert (1916-2000), Lavoie tells the story of François (Victor Andrés Trelles Turgeon) a dissatisfied man living and working in almost complete isolation on a Québec farm. Several flashbacks trace and begin to disclose the reasons for his disquietude: his single mother, Claudine (Dominique Quesnel) was a zealous Bible-thumper prone to emotional tirades and acts of violence. She herself had been cast out of the village for having and raising a baby outside of wedlock, and passed this sense of ostracization along to her son. She set her mind on forcing the young man into the priesthood, but his future didn't unfold as she wanted it to. As an adult, François becomes involved with Amica (Laurence Leboeuf), a mysterious young woman he buys from a man on a country road, and the two struggle with their attempts to communicate and forge an emotional connection. Le Torrent marked only the third cinematization of Hébert's complex and demanding literary work, following Claude Jutra's 1973 Kamouraska and Yves Simoneau's 1986 Les fous de bassan.

There are no critic reviews yet for Le Torrent. Keep checking Rotten Tomatoes for updates!

There are no featured reviews for Le Torrent at this time.