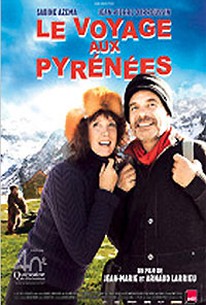 Getting away from it all causes more problems than it solves in this comedy from the French writing-directing team of Jean-Marie Larrieu and Arnaud Larrieu. Alexandre Darou (Jean-Pierre Darroussin) and his wife Aurore Lalu (Sabine Azema) are a pair of well-known actors who need a break from the tension and fast pace of their lives in show biz. Adopting the names "Mr. and Mrs. Go," Alexandre and Aurore head for a village high in the mountains of Southwest France, where they hope to enjoy some relaxing downtime and they won't be bothered. However, Alexandre and Aurore underestimated their own fame, and it isn't long before everyone in the town knows that a pair of movie stars are in their midst. As the couple head into the hills, Alexandre and Aurore discover they don't have much of a talent for roughing it, and while she believed that getting away from the city would help her deal with a recent bout with nymphomania, getting back to nature only increases her appetite for other men. Le Voyage Aux Pyrenees (aka Journey To The Pyrenees) was shown as part of the Directors Fortnight series at the 2008 Cannes Film Festival. ~ Mark Deming, Rovi

There are no critic reviews yet for Le Voyage aux Pyrenees. Keep checking Rotten Tomatoes for updates!

There are no featured reviews for Le Voyage aux Pyrenees at this time.