The League of Extraordinary Gentlemen2003

The League of Extraordinary Gentlemen (2003) 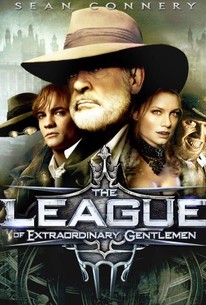 The League of Extraordinary Gentlemen Photos

Allan Quatermain, the world's greatest adventurer, leads a legion of superheroes the likes of which the world has never seen. Quatermain's extraordinary League is comprised of Captain Nemo, Dracula vampiress Mina Harker, an invisible man Rodney Skinner, American secret service agent Sawyer, Dorian Gray, Dr. Jekyll/Mr. Hyde and M--the League's enigmatic recruiter. The League members are staunch individualists, outcasts in fact, with checkered pasts and singular gifts that have been both blessing and curse. Now they must learn to trust each other and work as a team for the very hope of civilization. With little preparation and no time to lose, they will be transported via Captain Nemo's extraordinary submarine, the Nautilus, to the frontline of defense: Venice, Italy. There, a masked madman known as the Fantom plans to sabotage a conference of world leaders by setting off a domino chain of explosions, sinking the entire city. The threat is catastrophic, the risks are staggering. The League of Extraordinary Gentlemen has 96 hours to save the world.

Michael McGuffie
as Copper No. 1

Joel Kirby
as Copper No. 2

Michal Grun
as Assassin No. 3

Pavel Bezdek
as Marksman No. 1

Stanislav Adamickij
as Marksman No. 2

James Babson
as Marksman No. 3

Brian Caspe
as Guard No. 1

Critic Reviews for The League of Extraordinary Gentlemen

It's big, silly, and entertaining, and even its most naked franchise ambitions feel fun rather than frustrating, because they're so blatant.

Sadly, the rot sets in just over the halfway mark when the action loses its identity of fustian heroism and degenerates into another arcade video game of mundane destruction. A pity.

No matter how troubled the shoot was, the movie was shanghaied from the off, courtesy of Hollywood's dependence on market-defined 'success'.

... the effects and sets are marvellously fantastical and there are one or two neat comical allusions to the heroes' literary roots. But where's the excitement, the thrills, the tension, the style?

Your enjoyment of this fascinatingly flawed action-adventure fantasy will come down to how far you are prepared to go along with its original and absolutely off-the-wall premise.

Appallingly stupid and incompetently made.

The League of Extraordinary Gentleman can be summed up in one word: ordinary.

When you have time to think these thoughts while you're watching $100 million+ explode on a screen, that's one more sign the movie doesn't work.

A guilty pleasure from top to bottom

Without a strong, juicy villain -- one that we love to hate -- the film lacks an important ingredient.

Audience Reviews for The League of Extraordinary Gentlemen

Taking about 105 minutes to save the world, the plot line comes up a little flat, although not necessarily one to drag. The abundance of characters to follow is a highlight that keeps things on the move, despite some minor, yet sufficient, background for them.

In the grand scheme of things, there isn't a whole lot that stands out about the action, but there is enough to qualify this as an action adventure. The CG is more than adequate, but not amazingly extraordinary.

A League of Extraordinary Gentlemen lacks some sophistication; however it gets by with its characters and concept.

A mind-blowing and adrenaline-pumping action-packed adventure with great special effects, great story, great characters and non-stop fun that fuel this sensational film. Sean Connery proves he can still save the day. A great and exceptional cast of talents. An incredibly fun and ultra thrilling movie. An exhilarating and breathtaking thrill-machine from start to finish. You will love it. It`s The Avengers of the 19th century with some of the most mesmerizing heroes, villains and anti-heroes of their time, and coming to our time with awesome force. A tremendously exciting good time that deserves a look or two.

I really really wanted to like this movie, but somehow it turned out super-boring, kind of confusing , and poorly held together.

The League of Extraordinary Gentlemen Quotes