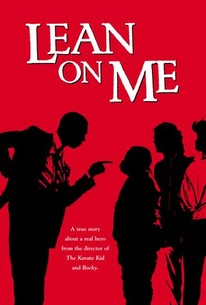 Lean on Me Photos

After earning rave notices for powerful supporting turns as a pimp in Street Smart (1987) and an alcohol abuse counselor in Clean and Sober (1988), actor Morgan Freeman began his ascent to stardom with this, his first lead role in a major motion picture. Freeman is real-life high school principal Joe Clark, a tough, harsh educator and administrator who in 1987 is given a nearly impossible task by his old friend, school superintendent Dr. Frank Napier (Robert Guillaume). Clark is asked to reform inner city Eastside High School in Paterson, NJ, a hotbed of delinquent kids and drug dealers. Considered the worst school in New Jersey, the state is threatening to take control of Eastside away from the local school board. If Clark can straighten out Eastside in time to get the school's basic-skills test scores up, he can have the job permanently. Although Clark's tyrannical approach and hard-line policies alienate many members of the staff and the community, his uncompromising campaign gets results and even makes him famous, much to the chagrin of his powerful enemies. ~ Karl Williams, Rovi

Harry Madsen
as Teacher in Cafeteria

News & Interviews for Lean on Me

View All Lean on Me News

Critic Reviews for Lean on Me

Avildsen's enthusiastic direction gives Lean on Me a heartwarming, feel-good tone that is accessible beyond the environs of its subject.

Lean on Me is not a documentary about the real Joe Clark. It is a fiction film about a character who is so troubled, obsessed and angry that the film is never able to say quite what it thinks of him. After the movie, neither are we.

Joe Clark's tough love philosophy plays into the pernicious respectability that plagues so many black communities- that discipline and assimilation will guarantee safety and success.

Inspirational movie about a controversial teacher.

Is a baseball bat the best way to organize a school? In the movie, sure. In real life, maybe not.

Freeman goes for the gusto and pulls it off...

Watchable but formulaic tough-love-teacher movie, made perhaps before Morgan Freeman could get himself better roles.

calculated to get you cheering -- and it does

Audience Reviews for Lean on Me

Morgan Freeman is great in this role, but Lean on Me is a bit cheesy and predictable.

A good movie. A bit dated but Freeman was great none the less.

Great courage and true story of a high school principal who is saving the school from the troublemakers. Morgan Freeman electrifies his fiction character in an extraordinary performance as an extraordinary man.

A teacher inspires his students to do better. Good flick.

Lean on Me Quotes