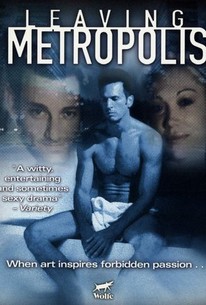 Successful Winnipeg-based artist David (Troy Ruptash) has become isolated from humankind due to his fame and notoriety, which negatively affects his inspiration for painting new works. Having come to the conclusion that the only cure for this condition is a heavy dose of culture immersion, David sets out to find a job -- and quickly finds one waiting tables at a diner run by married couple Matt (Vincent Corazza) and Violet (Cherilee Taylor). David purposefully manages to keep this new part of his life a secret from his best friends Kryla (Lynda Boyd) and Shannon (Thom Allison), especially when he starts developing a crush on Matt. As the two start a romantic relationship, Violet and Kryla each separately become suspicious and begin looking into the various inconsistencies surrounding Matt and David's recent actions. Matt, under pressure, ends the relationship but finds he must confess his sins to Violet when his and David's relationship is about to be made public due to some nude portraits David painted with Matt as the subject. The feature-film directing debut for Canadian playwright Brad Fraser, Leaving Metropolis gained wider public notice after being selected for inclusion into the 2002 Montreal World Film Festival.

Kirsten Johnson
as Sharon
View All

This story might be leaving Metropolis, but it didn't dress for the occasion.

'Pretty standard' pretty much sums up this movie.

Stagily presented, the characters always seem to have lots to say and not enough time to say it.

There are no featured audience reviews yet. Click the link below to see what others say about Leaving Metropolis!