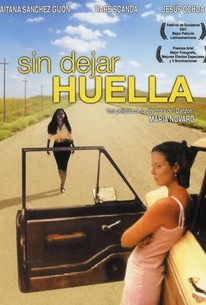 Ana (Aitana Sanchez-Gijon) is a Spanish dealer in ersatz Mayan relics. Crossing the border between Texas and Mexico, she is taken in for questioning by Mendizabel (Jesus Ochoa), a sleazy border officer with a major jones for his captive. Eventually Ana is freed but she's destitute and soon hitching her way through Mexico. She's picked up by Aurelia (Tiare Scanda), a young mother who has run away from her drug dealer boyfriend Saul (Martin Altomaro), hoping to build a better life for her two children. Although Ana and Aurelia have little common ground -- Ana is aloof and sophisticated, while Aurelia is uneducated and practical -- the two women ultimately form a bond of solidarity and camaraderie that is put to the test when both Saul and Mendizabel catch up with them. Sin Dejar Huella was shown at the 2000 San Sebastian Film Festival, where it earned the title of "Thelmita y Luisita" in the Spanish press.

In this breezy road movie, Novaro finds plenty of opportunities to poke delicious fun at the state of affairs in her country.

A Mexican Thelma and Louise, but without the same hard-edge.

There are no featured reviews for Leaving No Trace (Sin Dejar Huella) at this time.