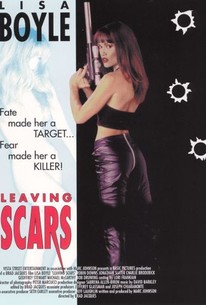 Diane Carlson (Lisa Boyle) is a struggling actress trying to make a name for herself in the movie business, which turns out to be no simple accomplishment. One night, while drinking and drugging at a party, Diane runs into an old friend who asks her to hold on to a computer disc for a while. The next morning, Diane discovers the disc is gone and her friend is has been killed. Michael Taylor, an acquaintance who was also at the party, tells Diane he knows a detective who might be able to help them find out what's happened, but before long Diane and Michael are being chased by gunmen, and they're taken on a wild and frightening ride through the seedy underside of Hollywood as they try to find out who wants them dead and why. Leaving Scars also features Robin Downs and Michael McCarthy.

There are no critic reviews yet for Leaving Scars. Keep checking Rotten Tomatoes for updates!

There are no featured reviews for Leaving Scars at this time.