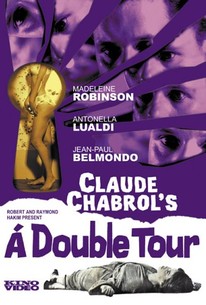 New Wave director Claude Chabrol employs an aloof perspective in this tale of murder and a dysfunctional family. The paterfamilias Henri Marcoux (Jacques Dacqmine) is having a fling with the neighbor woman Leda (Antonella Lualdi). When she turns up murdered, police suspect the milkman, a friend of the Marcoux's sultry maid Julie. But Laszlo (Jean-Paul Belmondo) the non-conformist Hungarian boyfriend of Henri's daughter Elisabeth (Jeanne Valerie) thinks not. Was the killer Henri's unbalanced son Richard? His wife Therese (Madeleine Robinson) is a regular harridan; is she guilty? Robinson won the "Best Actress" award at the 1959 Venice Film Festival for her portrayal of Therese. ~ Eleanor Mannikka, Rovi

Laszlo Szabo
as The Hungarian

Mario David
as Roger the Milkman

...a burst of rage against family propriety, a riotous basket of references to other movies, and a virtuosic display of giddily extravagant style.

Chabrol was a hedonist who made no bones about how much he relished food and sex, usually in that order.

An early sample of a French New Wave "whodunit" from Claude Chabrol.

Not the most accomplished Claude Chabrol film, but as an early effort it's pretty good. Chabrol's first film in colour, plus his first look at the bourgeoisie and first venture into the psychological thriller genre which he would later become known for. Adding to this list of firsts is Jean-Paul Belmondo's major screen debut. Probably more of interest to Chabrol fans rather than your average viewer.