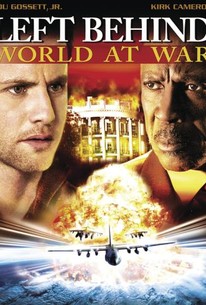 Left Behind: World at War Photos

The countdown to Armageddon continues as world leader Nicolae Carpathia (Gordon Currie) brings peace to the world in this installment of the popular Left Behind series inspired by the best-selling books by Tim LaHaye and Jerry Jenkins. As world peace blossoms and the citizens of the planet attempt to put the horrors of war behind them, American president Gerald Fitzhugh (Louis Gossett Jr.) ensures his country that America will not stand in the way of the historical peace pact. When an assassin's bullet misses its mark and President Fitzhugh gets a horrifying glimpse into the future, he soon realizes that he has left his country defenseless against Nicolae Carpathia's deadly deception. Now, with the future of the entire planet hanging in the balance, President Fitzhugh must place his trust in investigative reporter Buck Williams' (Kirk Cameron) Tribulation Force to battle the powers of evil and dethrone Carpathia before the horrors of the Book of Revelation become reality.

David Eisner
as Chief of Staff

Critic Reviews for Left Behind: World at War

Compared to virtually any other action thriller about fighting a crazed supernatural Romanian dictator... it's still unmistakably poor.

As far as unfortunate cheese and silliness, there are still some gems here.

I don't remember much of my New Testament, but someone might have to remind me what chapter it is where the president breaks into a top-secret bio-lab and uncovers Satan's Death-Bible gambit.

Audience Reviews for Left Behind: World at War

There are no featured audience reviews yet. Click the link below to see what others say about Left Behind: World at War!

Left Behind: World at War Quotes