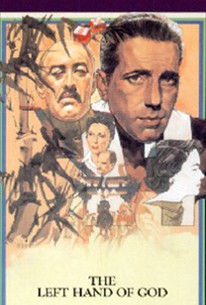 The Left Hand of God Photos

Humphrey Bogart stars in this improbable tale that marked Gene Tierney's return to the screen after battling mental illness for a number of years. Bogart plays Jim Carmody, an American soldier of fortune who, after crashing his plane in China, takes up with the Chinese warlord General Yang (Lee J. Cobb). Jim becomes Yang's advisor, but after watching one of the General's flunkies brutally kill a priest, Jim decides to leave. Unfortunately, Yang has declared that any deserter will be shot. Disguising himself as the slain priest, Jim sneaks out of the General's headquarters and makes his way to a mountain village where missionaries Beryl (Agnes Moorehead) and David (E.G. Marshall) take him in. Jim still is posing as the priest but his vows of celibacy are challenged when he falls in love with the attractive mission nurse Anne Scott (Gene Tierney). Anne feels ashamed because she is also attracted to him, but Jim writes to the bishop confessing that he is an impostor. At that moment, General Yang arrives, insisting that Jim rejoin his army or else he will burn down the village. ~ Paul Brenner, Rovi

Noel Toy
as Woman In Sarong

Marie Tsien
as Woman in Kimona

Stephen Wong
as The Boy

May Lee
as Bit Part (uncredited)

Sammee Tong
as Servant
View All

Critic Reviews for The Left Hand of God

The Left Hand of God is a bloodless screen adaptation of William E. Barrett's best-selling novel of several years ago.

Too uninspired to count for much.

Audience Reviews for The Left Hand of God

There are no featured audience reviews yet. Click the link below to see what others say about The Left Hand of God!

The Left Hand of God Quotes