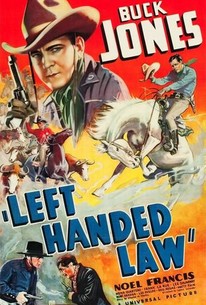 Left-Handed Law is an average western lifted well above the norm by star Buck Jones and director Lesley Selander. Jones is cast as Alamo Bowie, who tries to help rancher Sam Logan (George Regas) rid his land of outlaws. He does this partly because he's fond of Logan's daughter Betty (Noel Francis), but mostly because he feels like a-doin' it. The film's "money" scene finds Alamo agreeing to accommodate fatally wounded outlaw One-Shot Brady (Matty Fain), whose last wish is to die with his boots off. Our hero removes one boot, pauses, looks down, and says softly "Got one of 'em off, old timer." ~ Hal Erickson, Rovi

There are no critic reviews yet for Left-Handed Law. Keep checking Rotten Tomatoes for updates!

There are no featured reviews for Left-Handed Law at this time.