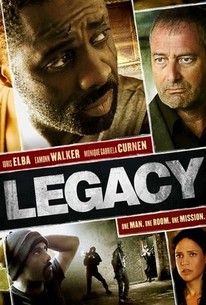 A haunted black-ops soldier struggles with paranoia and anxiety while hiding out in a seedy Brooklyn tenement building, and plotting to expose his brother - a rising New York Senator with White House ambitions. Malcolm Gray (Idris Elba) was on a mission to assassinate a powerful Eastern European chemical weapons dealer when he was captured, and brutally tortured. Years later Malcolm has returned home, but the psychological wounds from his harrowing ordeal still run deep. Now, shut away from the world with nothing but his suffocating memories to keep him company, Malcolm begins to suspect that his politician brother has succumbed to corruption, and vows to prevent him from reaching the White House by whatever means possible. ~ Jason Buchanan, Rovi

Mem Ferda
as Andriy
View All

Aspiring for psychological drama rather than action movie, the film takes itself far too seriously.

Elba carries the lead role and the film.

... the director has a good eye and a great lead actor to pull Legacy through.

As a showpiece for Elba, the movie functions well, and will probably be regarded mainly for being just that.

A tight psychological thriller that punches well above its low-budget weight.

Featuring plenty of visceral thrills and presented with more intelligence than many of the thrillers which spring from Hollywood strafing cliche bullets to little effect, it suggests everyone concerned is destined for bigger, better things in the future.

A complex character study brought to absorbing, haunting life through the fierce commitment of its acting and filmmaking.

An instant classic of suspense and paranoia that will have you spellbound from start to mind-blowing finish. An intensely gripping, bone-chilling and energetic edge of your seat psychological thriller. A frequent nail-biter that has you mind-racing and your pulse pounding every step of the way. Idris Elba gives a riveting performance that shines of movie star calibur. A devestating and powerful portrayel of a man on the edge and creating his own reality as he desends into madness. Elba is explosive and utterly brilliant, his performance stands up their with Robert De Niro in Taxi Driver and Guy Pearce in Memento. An outstanding and electrifying movie. An unforgettable tour de force. An incrediable master work from Director, Thomas Ikimi.

Meant to be an engaging claustrophobic, wall crawling, nerve jangling, flashback driven tense affair but turns out to be rather dull and boring with a plot that doesn't really explain itself too well leaving you guessing what the hell is going on. Acting wise its a vehicle for Elba and he does show promise even if he does kinda force the issue too much, whilst everyone else is pretty bland. Problem is the films title and cover gives you the impression its gonna be a gun ho type shoot em up, problem is its not that in the slightest haha its very different and of course physiological but do you really wanna watch a film where a man goes slowly nuts holed up in a grotty little motel room where absolutely nothing happens for the entire time accept one punch up?