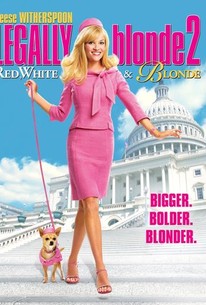 Critics Consensus: This blonde joke is less funny the second time around.

Critics Consensus: This blonde joke is less funny the second time around.

Critic Consensus: This blonde joke is less funny the second time around.

Taking home a paycheck that nearly rivals the budget of the first film, Reese Witherspoon reprises the role of Elle Woods in this sequel to 2001's surprise blockbuster Legally Blonde. When she's fired from her job at an upscale law firm for voicing her stance against the testing of cosmetics on animals, Elle heads to Capitol Hill to fight for her cause before Congress, leaving her boyfriend, Emmett (Luke Wilson, reprising his role from the film's predecessor), behind. Once there, she runs into plenty of adversity and red-tape and can't seem to find anyone who will listen to her proposals. While staying at the Watergate hotel though, she meets and befriends an elderly bellman (Bob Newhart in his first theatrical role since 1997's In & Out) who's been around politicians long enough to know the ins and outs of the political machine. With his help, Elle attempts to convince disillusioned U.S. Representative Rudd (Sally Field) to help her get her voice heard in front of the stodgy old coots of the legislative branch. Directed by Charles Herman-Wurmfeld hot off the success of his critically acclaimed indie comedy Kissing Jessica Stein, Legally Blonde 2: Red, White and Blonde boasts a supporting cast led by Jennifer Coolidge (Best in Show, American Pie) and Regina King (Jerry Maguire, Daddy Day Care). ~ Matthew Tobey, Rovi

Michael A. Krawic
as NIH Scientist

Melissa Paull
as Another Aide

Jeffrey Gelber
as Yet Another Aide

George Simms
as Speaker of the House

Carolyn Hennesy
as Congresswoman With Haircut

Susan Bivens
as Lady With Hair

Caroline A. Rice
as Intern Dancer

George C. Simms
as Speaker of the House

This time, Elle's improbable triumphs really are implausible--and way unfunny...as adroit and charming as Witherspoon is--and she gives it her all--she cannot rise above the embarrassingly broad, witless material.

Not as good as the first, but still enjoyable.

May be the worst film I have ever seen with an actress I have previously adored: in this case, Reese Witherspoon.

This is Witherspoon's movie and hers alone.

Reese Witherspoon snaps, crackles and shops when she should as the happy-go-lucky fashion victim Elle, but no amount of weapons-grade pep can get this second-hand outfit off the rack.

It's fluffy. It's fun. It's pink. It's got cute shoes, cute clothes, a cute star and a very very cute dog. Arf!

There are a few bright spots along the way, but not enough to prevent this from being declared legally bland.

This is just embarrassing, a simply and utterly embarrassing attempt to market money from a charming film.

Entertaining enough, especially in the last third or so (even when things really go over the top), but it doesn't really offer anything new.

Okay, take an breath: anybody hear of satire? When you peel away the pink and five-inch heels (and maybe you have to have special movie glasses to do that), you are left with a very biting take on the political system. That the congresswoman is trading away her ideals so she can "stay in Washington" to do some good is very sly. So is Elle Wood's response "You're not doing anybody any good." It was good to see this after a particularly nasty presidential election, heading into some serious horse trading on the budget. Great message: maybe the way to get things done is not the "Washington Way" but the Delta Nu way--call your friends and take a trip to the corridors of power.

I have left my original rating of 3 stars intact. It doesn't really deserve it, as sequels go, it is pretty horrible. I think really it's a 2, but I am leaving the extra star for Reese - she is really good as this character, even though at times in this one, she comes across like a moron. There is also some questionable bits in here, such as the revelation that Bruiser is gay. The "as long as he's happy" bit seemed forced and like this movie was trying too hard. Other bits are just plain awful (cheerleading dog song scene anyone?). Paulette is less likeable her than in the first one, actually kind of irritating, as are Elle's girlfriends. Don't know, pretty much inferior in every way and a silly plot, but just can't hate it too much.

Not as good as the first film but still really funny and Reese Witherspoon is perfect as Elle. A must see!

Okay so maybe Just Like Heaven isn't my guilty pleasure as much as this one is. Like I actually paid for this in the theater, watched it three more times on television, own the DVD, think about it from time to time. Oh my god it's soooo bad but in a really fun way. More fun than the first one, I think.