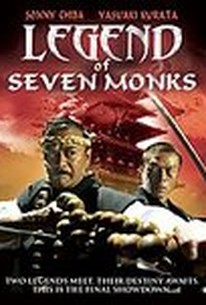 Japanese action icons Sonny Chiba and Yasuaki Kurata team up for the first time ever on the big screen in this supernatural thriller that finds two lone monks doing battle against an army of evil spirits. For 1400 years, the monks of Kikyo Temple have waged tireless war against the malevolent mountain entities that plague the Japanese wilderness. Over time, these brave monks were christened the "Seven Blue Dragons" for their valiant efforts to keep the world safe from a force that would consume the souls of every man, woman, and child on the planet. But centuries have passed since this battle was first waged, and now only two monks remain at Kikyo Temple. If Santoku and Genryu could just accomplish the Demon Seal Ritual mankind would be safe from the forces of darkness. But Santoku's life is in danger, and in order to save the world Genryu must first save an old friend. ~ Jason Buchanan, Rovi

There are no critic reviews yet for Legend of Seven Monks. Keep checking Rotten Tomatoes for updates!

There are no featured reviews for Legend of Seven Monks at this time.