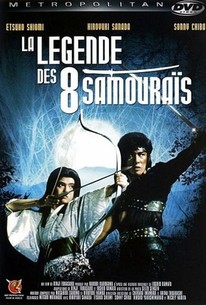 As might be gathered from its title, The Legend of the Eight Samurai is set in feudal Japan. Princess Hiroku Yokoshimaru's family is wiped out, along with her bodyguards. All that stands between the princess and certain death is an inexperienced young samurai played by martial-arts expert Sonny Chiba. Armed with little more than determination, Chiba must battle an octet of phantom warriors, a witch, and a killer centipede! The Legend of the Eight Samurai is as good as anything else of its type, sometimes a little better.

Critic Reviews for Legend of the Eight Samurai (Satomi hakken-den)

Audience Reviews for Legend of the Eight Samurai (Satomi hakken-den)

Some great acting and ECT. But to me its kind of the stuff we have already seen before but i still liked it and the music. Hay but its the kind of movie i like ^^

I'll admit it: my attention was not held by this movie throughout its entire running time. I did have a few beers to drink though, so that may have been a contributing factor. While this movie is not bad, it's not all that good-just a notch above "ok" The poor dubbing and cheesy effects and music add some laughs and contribute to the enjoyment, but I just couldn't get into this movie very much.