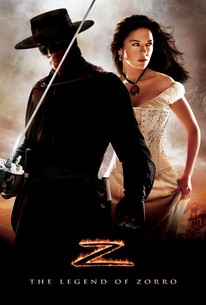 Critics Consensus: Zorro can survive a lot of things, but it looks like he can't survive marriage.

Critics Consensus: Zorro can survive a lot of things, but it looks like he can't survive marriage.

Critic Consensus: Zorro can survive a lot of things, but it looks like he can't survive marriage.

The Legend of Zorro Videos

The Legend of Zorro Photos

The year is 1850. After fighting to help California become the 31st state of the Union, Zorro promises his wife Elena that he will give up his secret identity and live a normal life as Alejandro de la Vega. But now, the same forces that conspired to keep California from becoming part of the United States are plotting to unleash a threat that has been 500 years in the making -- a threat that could change the course of history forever. Only Zorro can stop it by taking on the most dangerous mission of his life. But, if he does what he must, will it mean losing Elena forever?

News & Interviews for The Legend of Zorro

View All The Legend of Zorro News

Critic Reviews for The Legend of Zorro

That opening, alas, is the only time The Legend of Zorro hits, and keeps, its stride. Campbell moves the picture in fits and starts, elongating scenes we'd rather see cut short and ending others before they even have a chance to develop.

Banderas suddenly seems to be playing a human Puss-in-Boots, turning Zorro into a cartoonish buffoon more often that a swashbuckling hero.

It's Zorro, the domesticated blade!

In every imaginable way, this is a lesser film than the original.

The Legend of Zorro spirals into a convoluted series of incidents, bordering on the impenetrable until they're finally revealed as nonsensical.

The passionless string of the hoariest clichés is burnished with the phony luster of an I Can't Believe It's Not Butter commercial, and its plot seems to have been amalgamated by a computer program.

This faithful sequel's major fault just might be that it's so similar to its predecessor that it fails to stand out; but as it's transpiring, it's quite enjoyable.

Antonio Banderas was an excellent casting choice and his chemistry with co-star Zeta-Jones is palpable.

The Legend of Zorro is a campier sequel, occasionally given too much to childish antics. But once the story really kicks in, it transforms into a fine adventure film and a worthy addition to the Zorro film legacy.

Audience Reviews for The Legend of Zorro

A family friendly fun fest of circus acrobatics style swashbuckling given the heave-ho by the pundits at Rotten Tomatoes. Why? For being family friendly. Is the film little cheesy? Maybe, but its all in the name of family fun, at which its ideal.

This sequel should never have been made. You know, there are film series in which subsequent films get better (Godfather II may be best example), and there are others that completely fall flat. In the tradition of Caddyshack 2, Staying Alive, and Jaw: The Revenge, here comes The Legend of Zorro. Come to think of it, Oceans Twelve, which also stars Catherine Zeta-Jones, was pretty awful too. The Mask of Zorro was excellent; Banderas does Jackie Chan, Anthony Hopkins was suave and somewhat menacing, and CZJ was stunning as always- exotic as well as an outstanding actress. This attempt to update the story, with the addition of their young son (kind of an Anakin Skywalker), fails to recapture the boisterous spirit of the original. Zorro figuratively flies in on a chandelier and lands flat on his back. Why make Elena (CZJ) a shrewish wife? Why have a cartoonish villain out to spoil the party and rule the world? It's all too formulaic and thus disappointing. I suppose other action oriented series like Indiana Jones or Back to the Future could be likewise criticized, but they never failed to entertain. One thing a Zorro movie should never be is boring; this one comes close.

Great to see Antonio Banderas (as the swashbuckling hero) and Catherine Zeta-Jones (as the daughter of the original Zorro) return to this action-adventure sequel of 1998's The Mask of Zorro. Banderas brings out with great comic sense and Zeta-Jones' role is enhanced and she gets to be more than a pretty face. There are plenty of funny scenes with the family (including the son) of the swashbuckling hero. And awesome action sequences of what Zorro comes to fight and rescue against the new villains - the best sequence is the train at the end.

The Legend of Zorro Quotes