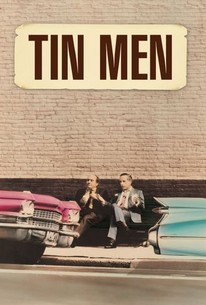 The second of director Barry Levinson's Baltimore Trilogy (the first was Diner, the third Avalon), Tin Men seems at first glance to be much ado about nothing. Set in 1963, the story begins when two aluminum siding salesmen, played by Richard Dreyfuss and Danny DeVito, are involved in a traffic accident. Fueled by their own individual frustrations--Dreyfuss dislikes the phonier aspects of his profession, while DeVito is unhappily married to Barbara Hershey--the two men begin an all-out war of harassment against one another. DeVito goes on a destructive rampage against Dreyfuss' material possessions, while Dreyfuss contrives to steal away DeVito's wife. An ironic twist of fate ironically, brings the two men to common ground at the finale. As with the earlier Diner, Levinson spends a great deal of screen time showing small minds obsessed with small things: counterpointing the snow-balling hostilities between Dreyfuss and DeVito is Jackie Gayle as DeVito's partner, who can talk of nothing but the TV series Bonanza. Michael Tucker, who like Barry Levinson was Baltimore born and bred, repeats his Diner role as "Bagel." Listen for director Levinson's voice as a baseball stadium announcer.

Michael Tucker (I)
as Bagel

Joshua Billings
as Man At Crash

Josh Billings
as Man at Crash

Jeffrey Moser
as Man At Crash

There are no critic reviews yet for Legends - Live at Montreux 1997. Keep checking Rotten Tomatoes for updates!

There are no featured reviews for Legends - Live at Montreux 1997 at this time.