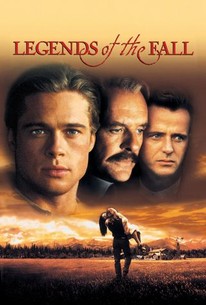 Critics Consensus: Featuring a swoon-worthy star turn by Brad Pitt, Legends of the Fall's painterly photography and epic sweep often compensate for its lack of narrative momentum and glut of melodramatic twists.

Critics Consensus: Featuring a swoon-worthy star turn by Brad Pitt, Legends of the Fall's painterly photography and epic sweep often compensate for its lack of narrative momentum and glut of melodramatic twists.

Critic Consensus: Featuring a swoon-worthy star turn by Brad Pitt, Legends of the Fall's painterly photography and epic sweep often compensate for its lack of narrative momentum and glut of melodramatic twists.

Legends of the Fall Videos

Legends of the Fall Photos

The sweeping, melodramatic saga of three brothers, their powerful father, and a beautiful woman, the popular period drama Legends of the Fall presents a romanticized view of rugged masculinity against lush Montana scenery. Based on a novel by Jim Harrison, the film covers decades in the lives of Alfred (Aidan Quinn), Tristan (Brad Pitt), and Samuel (Henry Thomas) Ludlow, the sons of retired military man William Ludlow (Anthony Hopkins). Raised by the unorthodox Ludlow after the departure of their mother, the boys grow up close, sharing an appreciation of the land and a pioneering spirit. The family becomes divided, however, when young Sam enlists in World War I over his father's objections, and his brothers follow suit to protect him. Despite these efforts, Sam dies in battle, leaving Alfred and Tristan to return home and deal with the lingering torment. Further complicating matters is the presence of Sam's beautiful fiancée, Susannah (Julia Ormond). After Sam's death, she attracts the romantic attention of both the responsible Alfred and the brooding Tristan, a conflict that threatens to drive the brothers apart. Aspiring to epic status, the film utilizes period detail and attractive landscapes as a backdrop for tragic, doomed romance. While some critics complained that the film resembled a romance novel writ, veering at times into the overwrought, audiences embraced the combination of emotion and grand historical scale, making the film a box-office success. ~ Judd Blaise, Rovi

Gordon Tootoosis
as One Stab

David A. Kaye
as Samuel Decker

Bart the Bear
as the bear

Critic Reviews for Legends of the Fall

At first, the picture plays like East of Eden with a bonus brother; it gets sillier as it goes.

The actors fit their roles exceptionally well, but Zwick rarely allows them the kinds of crucial, intimate moments that establish how the characters feel about each other.

Just when it starts to seem as if Legends might just turn into a pretty good movie, along comes some tired, soap-opera plot device.

Check your cynicism at the door, and just revel in its enormity.

There's a vast psychodrama being played out on the Ludlow ranch, battles between generations, philosophies, races and sexes. And the landscapes, photographed by John Toll, majestically backdrop all the personal and cultural furies.

Every wisp of wind carries some timbre of a guttural growl of passion.

What a magnificent piece of old tosh Legends of the Fall is: playing extremely close to a genius pastiche of the melodrama genre.

A weird melodramatic epic -- Bonanza crossbred with the kind of novel that uses Fabio on the cover.

While the production is attractive in a calendar-photo sort of way, there's not a speck of genuine feeling in its glossy images.

The real star, however, is John Toll's Oscar-winning cinematography, which is equally at home with the stunning beauty of the mountainous terrain and the killing fields of war-torn France.

Bloated as a TV miniseries two nights too long, Legends of the Fall is stiff and uninteresting.

Audience Reviews for Legends of the Fall

Not a legendary tale, but pretty absorbing family drama. Anthony Hopkins and Brad Pitt shine in their role and so do the supporting actors. However, I gotta admit that I didn't like Julia Ormond and Karina Lombard

A movie that I feel is both good and bad at the same time. While it is a powerful story, the script is so overly corny that it is ruined. The acting is so-so, Brad Pitt and Anthony Hopkins gave the only decent performances.

"Legends of the Fall" is an epic set in the early 1900s about a close-knit family that randomly comes together and breaks apart. Tristan (Brad Pitt), Alfred (Aidan Quinn), and Samuel (Henry Thomas) have always been real close. One thing that all three brothers have in common is that they all go into war together and see how tough it is to experience such a struggle, even though their father, Colonel William Ludlow (Anthony Hopkins) doesn't like the idea. Another thing they have in common is that they all love Susannah (Julia Ormond). All of the characters in "Legends of the Fall" have their own separate personalities that can clash or come together at the drop of a hat. I could explain each of them, but that would give the movie away. Throughout the film, the different characters provide commentary about different events such as reading letters that are written, or telling personal thoughts. "Legends of the Fall" won the 1994 Oscar for best cinematography in a motion picture, and it's true, this film does have spectacular scenery and landscapes, but that's the least that "Legends of the Fall" has to offer. There are both good times and bad times in "Legends of the Fall." Overall, it's a fairly depressing movie, but that's just because it's a realistic film about how jealousy and bad times such as war ruled the world back in the early 1900's, and probably even more these days. As I mentioned earlier, all of the main cast put out their absolute best effort in "Legends of the Fall." As always, I was the utmost impressed by Anthony Hopkins's performance. Brad Pitt, who was the main star in this film, puts out what is his best effort ever, in my opinion. I can tell when a movie is one of my favorites of all time by how much I want to see it after I see it for the first time, and especially by how often I watch it after seeing it several times. "Legends of the Fall" is one of those movies that never has and never will get old to me. No matter what kind of movie you like, even if you're not crazy about epics or dramas, give "Legends of the Fall" a chance. It just might become one of your favorite motion picture legends. NOTE: That was my Amazon review from the year 2001. Indeed, Pitt's best, one of Hopkins's best, and one of my favorites.

Dazzling, riveting and amazingly beautiful! There was a lot more to this film than just it's eye-pleasing visuals though, because it's also blessed with a well-written script, and a cast that leaves little to complain about (the most notable actors of which being Brad Pitt, Anthony Hopkins and Julia Ormond, who all shine in their respective roles). Great music score as well by James Horner. For all it's cinematic beauty, however, you'll not find your usual Hollywood ending here. It's more a tale of loss, revenge and tragedy, than anything else. Perhaps a tad too tragic for my taste, as I would have prefered to see a happier fate for its characters. A good movie either way though, and an emotional journey well worth taking.

Legends of the Fall Quotes