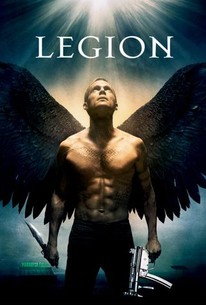 Critics Consensus: Despite a solid cast and intermittent thrills, Legion suffers from a curiously languid pace, confused plot, and an excess of dialogue.

Critics Consensus: Despite a solid cast and intermittent thrills, Legion suffers from a curiously languid pace, confused plot, and an excess of dialogue.

Critic Consensus: Despite a solid cast and intermittent thrills, Legion suffers from a curiously languid pace, confused plot, and an excess of dialogue.

Scott Stewart's supernatural thriller Legion, scripted by Peter Schink, concerns a group of strangers in an out-of-the-way eatery who become the first line of defense when God, believing the human race is no longer worthy of Him, decides to end their existence. This motley crew's only spiritual ally is the archangel Michael, played by Paul Bettany. Dennis Quaid, Tyrese Gibson, Charles S. Dutton, and Lucas Black co-star in the Screen Gems production. ~ Perry Seibert, Rovi

Tyra Danielle
as Woman With Presents

Call it Assault on Manger 13.

Swallowed up by its effort to be a film of multiple genres. The only genre it earns a place in is comedy; it achieves an amount of unwarranted laughs of biblical proportions.

Could have been T2 with seraphs, or Assault On Precinct 13 crossed with Revelations. Instead, it's a lazy genre bore. Doesn't bode well for Priest, the next Stewart/Bettany film in the pipeline.

Bettany's job: rescuing the modern Mary, a skanky waitress, and saving her unborn child. Our job: holding back the laughter.

Starts off heavenly then quickly falls to ground.

Director Scott Stewart, who also co-wrote the film, shows far too many scenes in which characters talk to try to cover up plot holes that bring the film to a grinding halt.

An utterly ludicrous entry in the biblical-horror subgenre.

Why spend your money watching an extended trailer?

I really enjoyed this stupid movie.

Legion is a supernatural biblical horror flick that had the potential of being so much better than what it turned out to be. The film's biggest problem is that it relies more on special features than on story, thus the plot itself suffers from lacking ideas and undeveloped characters that really doesn't pay off. Legions had a very interesting concept, but it really didn't ended being a boring, unimpressive ride that simply failed at being a memorable and ultimately enjoyable film. There are a few chilling moments, but it's not enough to make for a memorable horror picture. The end of the world aspect of the film really didn't tie in to the overall story and I felt it was pretty sloppy. The way it was thrown in to the movie, seemed lazy and out of place, as if the filmmakers just needed some leverage to the films plot. The film's downfall is aided by a wooden cast of actors, and the somewhat good start quickly falls apart and becomes a train wreck. If the film had a better plot, and didn't rely entirely on special effects, I think that this would have been a more compelling film to watch. As it stands, Legions is a poor horror tale that is quite forgettable in the long run. The film is defi8nitely not worth your time, and it's just an effects extravaganza that lacks plot, good characters and memorable chills. Legions fails in terms of a horror film with religious overtones, and the potential in making a great picture is wasted after the first thirty minutes of the film when the film relies more on effects. Legions is a film that lacks substance and good direction. This is not a film worth your time, and it's a poor attempt at creating a biblical horror yarn.

It sounds like from an old John Carpenter movie: the world's fate decides on the residents of a desert diner, who desperately fight for their lives as God's army is trying to get to a pregnant woman among them. Because, you know, God had it with this crappy Earth and only one of his arch angels is on our side. What promises creepy fun or cool stand offs is sadly rather dumb. The film misses out on bringing biblical motifs or characters to the mix and instead throws ice cream truck drivers, grannies and kids obsessed by demons at the protagonists. That's lame and never really exciting. Things get a tad cooler when Gabriel comes down from heaven to take on his brother Michael. The showdown is better than the first half but only makes you realize how many opportunities for a fun apocalyptic ride have been missed here. Meh.

Okay .. neat premise .. okay action . . I am pretty sure this is full of at least 2 dozen plot holes. BUT I had fun watching it. Not bad not good. I would almost say they tried very hard to not piss anyone off when it came to religion. Where they may have been able to go overboard one way or the other. In the end, like I said, I had fun watching it.