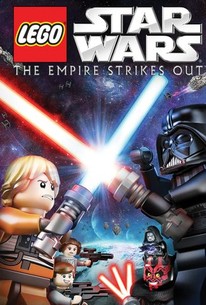 Your favorite characters are back to save the galaxy in LEGO Star Wars: The Empire Strikes Out. The heroes of the Rebel Alliance including heroic Luke Skywalker, swaggering Han Solo and steadfast Princess Leia have no time to celebrate their victory over the Empire as a new Imperial threat arises. But as Jedi-in training Luke embarks on this next mission, he discovers that his celebrity status as a "Death-Star-Blower-Upper" can be a double-edged lightsaber when he's constantly mobbed by crazed fans. So much for secret missions! Meanwhile, Darth Vader and Darth Maul are locked in a hilarious "Sith-ling" rivalry as they compete for the Emperor's approval. It's an action-packed comic adventure that's out of this world!

Critic Reviews for Lego Star Wars: The Empire Strikes Out

What makes the silliness of this little story work is the internal love for the series.

Parody is short, funny, but definitely an ad for LEGO toys.

Audience Reviews for Lego Star Wars: The Empire Strikes Out

There are no featured audience reviews yet. Click the link below to see what others say about Lego Star Wars: The Empire Strikes Out!