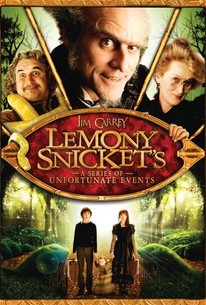 Critics Consensus: Although it softens the nasty edges of its source material, Lemony Snicket's A Series of Unfortunate Events is a gothic visual treat, and it features a hilariously manic turn from Jim Carrey as the evil Count Olaf.

Critics Consensus: Although it softens the nasty edges of its source material, Lemony Snicket's A Series of Unfortunate Events is a gothic visual treat, and it features a hilariously manic turn from Jim Carrey as the evil Count Olaf.

Critic Consensus: Although it softens the nasty edges of its source material, Lemony Snicket's A Series of Unfortunate Events is a gothic visual treat, and it features a hilariously manic turn from Jim Carrey as the evil Count Olaf.

The best-selling series of subversive children's books from author Lemony Snicket (aka Daniel Handler) come to the screen in this black comedy for the whole family (and how often do you get to see one of those?). The Baudelaire siblings -- gadget freak Violet (Emily Browning), bookworm Klaus (Liam Aiken), and baby Sunny (Kara Hoffman and Shelby Hoffman) -- were living a fairy-tale existence with their parents until they died in a fire that destroyed the family home. With few close relatives and a large fortune the children won't inherit until they reach adulthood, the Baudelaire children are left in the care of the peculiar Count Olaf (Jim Carrey), an out-of-work actor who would love nothing more than to get his hands on the kids' money. It doesn't take long for the children to figure out that Count Olaf is up to no good, and they try to steer clear of his various murderous schemes with the help of wildly paranoid Aunt Josephine (Meryl Streep) and snake-fancying Uncle Monty (Billy Connolly). Lemony Snicket's A Series of Unfortunate Events also features Catherine O'Hara, Timothy Spall, Cedric the Entertainer, and Luis Guzman; Jude Law narrates in the guise of author Snicket. ~ Mark Deming, Rovi

Cedric the Entertainer
as The Detective

News & Interviews for Lemony Snicket's A Series of Unfortunate Events

View All Lemony Snicket's A Series of Unfortunate Events News

Critic Reviews for Lemony Snicket's A Series of Unfortunate Events

Book's fans will enjoy, but too creepy for some.

It's all a bit superficial, but highly entertaining, wickedly funny, and alluring enough to make you want to start reading the books.

If you sit back, relax and just accept it for what it is -- an enjoyable, escapist Gothic pantomime -- you will go home happy.

A sick joke of a film that realizes the best children's entertainment doesn't hide from the bleaker side of life, but plunges into the void and respects kids enough to assume they can handle it.

A phantasmagoric family film with both bite and heart.

This film is endlessly dark and gloomy for a kids story. But somehow, it works.

Whilst the direction and script seem off, the rest of the production work is excellent.

Between Harry Potter and the Prisoner of Azkaban and Lemony Snicket 2004 is a banner year for dark and fun kid's films.

A dastardly unadulterated delight of a film.

We can be grateful that the series has given Carrey one of his better vehicles in recent years, and that Carrey has risen to the occasion so well.

Audience Reviews for Lemony Snicket's A Series of Unfortunate Events

Nowhere near the brilliance of Lemony Snicket's series, the film is a disappointment as far as adaptations go. It is aesthetically pleasing, however, with wonderful visuals. While there is some humor, most of the film is quite lifeless with wooden acting. If only the makers had spent as much time on the script as they did on the aesthetics, the film may feel a little less empty than it does. Ultimately, the film is pretty to look at, but nothing more. Its main failure not only comes from awkward pacing and a bland script, but an attempt to mix in secrets revealed in the last books of the series with the first three installations. Frankly, it doesn't work.

I was once addicted to the books that this film was based on. Due to me being bored, I decided to take down off of my bookshelves the entire saga of the Baudelaire children and read each book nonstop until the end of all 171 chapters. Wanting more, I decided to rewatch the film. At first, I was puzzled with what I saw. I know that novels will be different when they are presented on film, but I was puzzled at the drastic change of the content. The original series was a modern masterpiece of dark comedy and psychological humor while the film was mainly slapstick with some dark humor and impressive set pieces. After coming to terms with that, I rewatched the film to base it on it's own terms. What I got was an okay film that proves how versatile Jim Carry can be in terms of playing different characters. That is what might be the greatest problem with this film: it is built too much on being artistic and show casing Carry's talent as an actor. The rest of the cast is... okay. Nothing that really stood out to me and for a film that has Timothy Spall, Jude Law, and Meryl Streep, this is a shock due to how bland they acted. I know in the books their characters only served as disposable characters just to move the story along, but here they just seem to be their for no reason. You could literally remove those characters and the film would still be the same. I find this disappointing because all three actors play characters that are amusing, interesting, and worth watching. But with them removing almost all likability that they had in the text, they are just left hallow characters that serve no purpose. Honestly, this broke my heart a bit because I wish that they would have gave these characters life. But, seeing as how this film is built on the triple performance of Jim Carry, I might as well talk about that for a bit. He is good in this version of Olaf, and that is to say the film adaption. He portrays this dark character as a comedic joke, making each reincarnation more humorous and insane than the previous. Watching him does make one smile due to the silly and outrageous presentation. His performance is not as good nor as memorable as others, but the look he givers Olaf is. For the children, they are okay. Emily Browning portrays a more mature version of Violet which, for me, I liked. In the books that the film is adapted from, Violet comes off as weak and a little whinny. Here she is more mature, independent, and clear thinking. Liam Aiken does okay as Klaus, giving us a more whinny version and one that is not as good as you can hope. Personally, I wish that they picked a different actor other than Liam Aiken. But, that is just me. Seeing as how Sunny is just a baby in the film, it would be unfair for me to critique that performance. The set design and look of this film is wonderful. That is the one thing they did get right: the complete gothic feel of the story. Reading the novels, there is just a wave of Tim Burton-esque influence with the tone and look of the settings. If I could applaud this film for anything, it would be the art direction. In a nutshell, I did not care for this film at all. Yeah, it is a nice little family film that is good for passing the time, but if you are looking for a good adaption, you will be screwed to find that this is no such case. But, you know, it is a pity: this film could have been great.

"Lemony Snicket's A Series Of Unfortunate Events" is a movie based off of the book series of the same name. What can I say about this movie, it's great, for children or fully grown adults. It actually does follow the source material quite well, and is told from an interesting first person perspective by one of the orphans that insinuates he is writing the series of books as he narrates this movie. It's a very interesting concept, but anyway, onto the movie. The movie, as do the books, follow the story of three orphans trying to find a new home after their old one was burned down and their parents killed in the fire. Soon enough, they meet Count Olaf, their horrible relative who, throughout the movie, constantly keeps trying to kill them so he can inherent their family fortune as their legal guardian. The first thing you will notice, just by watching the trailers, is that Jim Carrey plays Count Olaf, as well as his many disguised personas, and he does the role beautifully. He's truly a very interesting and unique villain in any movie, one minute you'll love to laugh at him, and the next you'll love to hate his guts. He plays the part well and, as Jim Carrey always is, is hilarious. This movie is full of memorable characters such as Count Olaf, the movie has an outlandish theme, yet feels real at the same time. Truly a well constructed, and fun to watch movie.

Jim Carrey is my favorite actor and this feels a lot to me like something Tim Burton would do. Jim Carrey reminds me of Michael Keaton in Burton's Beetlejuice. A funny man playing a creepy man. A little to much CGI was used in the film but behind its far too dark overtones it has a real message that could be learned from at heart.