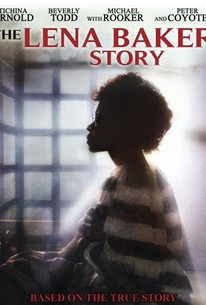 The Lena Baker Story, starring Tichina Arnold, Beverly Todd and Peter Coyote, tells the civil rights story of a young, impoverished girl in rural Georgia in the early 1900s, who - in a desperate attempt to break free of physical and mental abuse - accidentally killed a White man. With a dismissive lawyer by her side, a jury of 12 Caucasian men found her guilty in a trial and deliberation that, together, lasted less than four hours. Due to a long clemency campaign led by her family, including in more recent years her grand-nephew Roosevelt Curry, Georgia's Pardon and Parole Board finally granted a posthumous pardon in 2005 - six decades after her execution - ruling that a "grievous error" occurred when she was denied clemency following her trial. "I believe she's somewhere around God's throne and can look down and smile," reflects Curry. -- (C) Barholtz Entertainment Inc.

This movie was very moving. Tichina Arnold did an amazing job. This was a touching, real life situation that should never have happened. This women was held captive, and abused by a sick white man for years...yet they executed her for defending herself. How dare they pardon her decades later. That only seemed like a sick joke to me. Well done, and excellent cast.