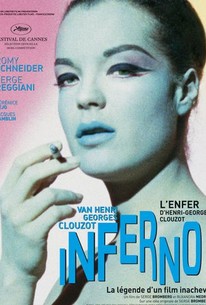 In the 1950s and '60s, Henri-Georges Clouzot was one of France's most acclaimed and successful filmmakers, a director who enjoyed massive international success with Le Salaire de la Peur (aka The Wages of Fear) and Les Diaboliques, and his gift for generating tension and suspense onscreen earned him the nickname "the French Hitchcock." In 1963, Clouzot began work on a project called "L'Enfer" (aka "The Inferno"), a tale of jealousy that leads to madness, and the filmmaker was promised all the time and resources he needed for the picture. However, while the director was meticulously prepared when shooting began, after only three weeks the production was halted and never resumed; Clouzot would complete only two more films before his death in 1977. Filmmakers Serge Bromberg and Ruxandra Medrea try to answer the question of what happened to a project so full of promise in L'Enfer d'Henri-Georges Clouzot (aka Henri-Georges Clouzot's Inferno), a documentary which looks into the shadowy history of this lost film. Including interviews with members of the cast and crew (among them production assistant Costa-Gavras, who went on to a distinguished career of his own) and excerpts from the surviving footage (seen by the public for the first time here), the film tells the tale of how a great director ran afoul of his own demons while making a movie about a troubled man. Henri-Georges Clouzot's Inferno received its world premiere at the 2009 Cannes Film Festival.

The remains of an aborted movie can become a fascinating pastiche.

The results are like nothing you've seen before: Clouzot seemed to be reinventing the medium itself.

A fascinating exploration of artistic self-destruction and hubris...

An amazing glimpse into not only what could have been but how easy it is for a filmmaker to go down the rabbit hole into his own project-killing obsessive behavior.

It is, in effect, a making-of documentary about a movie that was never made -- a movie that was supposed to revolutionize the art form and that survives, in the limbo between intention and realization, as an intriguing possibility.

Thankfully, the story -- and especially Clouzot's existing footage -- is fascinating enough to transcend the treatment.

An intriguing glance at a notorious failed film production, Henri-Georges Clouzot's Inferno is must see for fans of the accomplished auteur, as well as anyone prone to getting drunk off the beautiful visage of Romy Schneider.

Trust me. You'll remember this failure's images long after you've forgotten countless other movies, even those that have been hailed as a triumph.

This 'unmaking-of' documentary is as mesmerisingly compelling as its subject might have been, and adds some splendidly disorienting reels to the cinema of anxiety. Unmissable - even if we all missed the film at its centre.

Even in its current fragmented, disassembled state, the scenes from Inferno proper exert a bizarre spell.

The documentary's investigative work goes only so far, but the images the great director created are revelatory.

... doesn't attempt to reconstruct, only reveal the play with imagery, the experiments in expression, the visual ideas at play and the obsessive drive to keep exploring...

I'm surprised that there is an audience that appreciated this film. Upon finding a canister of an unfinished film. the film maker probably would have been better off just showing us what was within. Instead we have a meandering mess of images that confuses Clouzot's original intentions.

Intriguing doc about the legendary H.G Clouzot's unfinished film 'L'Enfer'. It has rare footage of dailies, cam/makeup tests and interviews with cast/crew.

This is an intriguing documentary about "Inferno," a film that Henri-Georges Clouzot started directing but was not able to complete in 1964, starring Romy Schneider and Serge Reggiani in a tale of jealousy and madness at a resort hotel. Reality is shot in black and white while the hallucinations are shot in color, combined to form a hypnotic mix. Sadly, all that survives of this film are 185 film canisters comprising 13 hours of footage. What has not is a soundtrack and occasionally Berenice Bejo and Jacques Gamblin read some of the dialogue on a soundstage. This is supplemented by interviews with surviving crew members including Costa-Gavras who was an assistant on the project but I would have liked to have heard from Jean-Louis Trintignant who plays a cameo role in the drama. On such an experimental project with American support and an international star, the documentary makes the case that Clouzot bit off more than he could chew.(The first sign that something may have been wrong was the 300 page script.) While the scale may have been larger than he was used to, Clouzot is also the same person who directed Simone Signoret in "Diabolique" and Yves Montand in "The Wages of Fear." Actually, the failure may have been one of nerve, as all the lengthy preparation and tests could have been procrastination(take it from somebody who knows). And I am wondering how much of the movie was meant to be autobiographical on a psychological level, as he had suffered previously from depression and this was his first film in four years. While watching the clips in this documentary, I was struck by the notion, as I usually have while watching a Brian De Palma movie, that I have seen this movie before. And I had. Thirty years after Clouzot could not bring his movie to fruition, Claude Chabrol adapted his script with Emmanuelle Beart and Francois Cluzet starring which the documentary fails to mention, missing a valuable opportunity to compare and contrast. In any case, I recall not liking Chabrol's version, as his workmanlike approach was not quite right for Clouzot's heady vision.