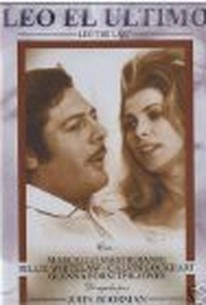 Prince Leo (Marcello Mastroianni) is the exiled ruler from an unnamed country living on the edge of a London ghetto with his harridan mistress Margaret (Billie Whitelaw). While viewing birds through his telescope, he witnesses the struggles of his black neighbors to survive their harsh urban environment. When Salambo (Glenna Forster Jones) is forced into prostitution by Jasper (Keefe West), the prince decides to take action. He rescues the woman after she is raped and makes her his ward and protectorate. When the royal guards invade the neighborhood, Leo and a makeshift troop of residents repel the advance with fireworks and homemade explosives. The film is based on the George Tabori play "The Prince" and deals with class struggles of the poor against the haughty royals. ~ Dan Pavlides, Rovi

Liz Smith
as Uncredited
View All

Critic Reviews for Leo the Last

There are no critic reviews yet for Leo the Last. Keep checking Rotten Tomatoes for updates!

There are no featured reviews for Leo the Last at this time.