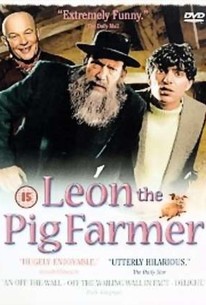 A Jewish Londoner embarks on a journey to find himself after learning some shocking news about his past in this eccentric British comedy. As the film begins, Leon (Mark Frankel) is already in a time of transition, having quit his job for moral reasons and assumed a position in his mother's catering firm. His life is thrown into even more disarray when a bizarre coincidence reveals the truth behind his birth: not only was his birth the result of artificial insemination, but a lab mix-up means that his real, biological father is a complete stranger. The confused Leon sets out to find his "real" dad, and unexpectedly discovers that he is descended from a family of Yorkshire pig farmers. Co-directors Vadim Jean and Gary Sinyor move their story in fits and starts, allowing room for countless digressions, from a torrid affair with a outrageous artist (Maryam d'Abo) to the accidental breeding of a rather unique pig. While the film proves uneven, fans of the quirkier varieties of British comedy should find Leon the Pig Farmer's off-beat tone and taste for surrealistic details suitably entertaining. ~ Judd Blaise, Rovi

David Graham
as The Chef

How funny can a movie be about the world's first kosher pig farmer? Funnier than you'd expect.

Not a great movie, but a great example of a type of film that could be made not that long ago for about $320,000.

There are no featured reviews for Leon the Pig Farmer at this time.