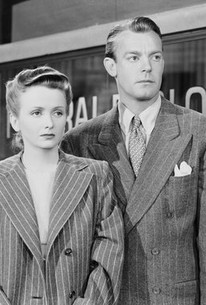 Adapted from the Cornell Woolrich novel Black Alibi, The Leopard Man is a lesser but still fascinating psychological-horror effort from producer Val Lewton. Someone has been killing off the citizens of a small New Mexico town, and the most likely suspect is a huge leopard, purchased for a local nightclub act by press agent Jerry Manning (Dennis O'Keefe), which has escaped from its cage. Neither Manning nor his star Clo-Clo (Margo) are totally convinced that the big cat is responsible.The haunting finale takes place during the annual "Day of the Dead" festivities. The opening sequence of Leopard Man, atmospherically detailing the last few moments of murder victim Teresa Delgado (Margaret Landry), is so powerful that the rest of the film seems anticlimactic. Long available only in its 59-minute reissue form, the film was restored to its original 65-minute running time in the mid-1980s.

Russell Wade
as Man in Car

John Tettener
as Minister
View All

Critic Reviews for The Leopard Man

It's all confusion, in fact too much for an audience to follow.

A film for lovers of pools of darkness.

Half-baked efforts such as this one provoke little more than a yawn.

There's a certain multi-cultural conflict that distinguishes the Lewton-Tourneurs.

epending for much of its effect on a subtle and poetic nudging of the spectator's imagination, the film has a couple of sequences that are truly terrifying.

...those seeking cheap thrills should look for creature-features elsewhere; The Leopard Man is classy, striking entertainment from the top drawer...

This is entertaining pulp fiction produced with a keen visual eye.

This film still seems to be one of Hollywood's original gems -- nothing impure in terms of cinema, nothing imitative about its style, and little that misses fire through a lack of craft.

Val Lewton and Jacques Tourneur reteamed one final time for The Leopard Man, but this one unfortunately runs a distant third to their two previous triumphs, Cat People and I Walked with a Zombie.

The camera's tender scratch, a most graceful vision of a most predatory world

The film has atmosphere to spare... [but] uses it like a crutch for a story that doesn't work on its own.

Comes with one of the cinema's most shocking murder scenes, with barely anything actually shown.

Audience Reviews for The Leopard Man

The movie starts out good, but it disappoints in the end.

I thought The Leopard Man was going to be a rehash of Cat People was I was pleasantly disappointed. It's another thriller out of the Val Lewton stable about a killer escaped panther, but as time goes on turns out to be something completely different. The twist at the end isn't very difficult to figure out, but The Leopard Man isn't about a clever script or so-so acting. It's about fantastic and shadowy photography and astonishing direction. Essentially any scene in this movie where someone gets murdered is a suspenseful work of art able to make even the most jaded of horror fans jump out of their seats. Even if its just a little bit.

Not quite as good as Cat People. Interesting, but boring for the most part, I felt.

A lesser known, but still pretty good, film from the Val Lewton crew. A leopard escapes in a small town and people start dying, but is the leopard the killer or is the truth more sinister? Some nice eerie effects, like all of Lewton's films, implied rather than shown. But the climax was a bit of a let-down for me. Luckily it's just a little more than a hour long, so I don't feel like I wasted too much time.