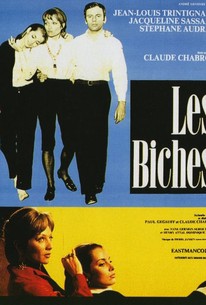 Bored, wealthy Parisian socialite Frederique (Stéphane Audran, then director Claude Chabrol's wife and the star of many of his films) picks up young sidewalk artist Why (Jacqueline Sassard), brings her home, offers her a nice hot bath and coffee, and seduces her. Then Why follows Frederique to the latter's Saint-Tropez villa, where they alter their sensuous encounters with wild parties for the idle rich. At one of these parties, Why meets Paul (Jean-Louis Trintignant), a handsome young architect, and immediately falls for him. Jealous Frederique intervenes only to lure Paul into her own arms, and the two soon depart for Paris, leaving Why alone with her frustration at the villa. Though often labeled the French Hitchcock, here Chabrol consciously abandons suspense for adult-oriented drama.

Critic Reviews for Les Biches (Bad Girls) (Girlfriends) (The Does)

What is extraordinary is the portrayal of a kind of deviate Dolce Vita, in which the waif comes to regard her former lovers, male and female, as parental figures, to whom she becomes quite filially attached.

Claude Chabrol's Les Biches depends almost entirely on style, and as style it succeeds. He is not so much interested in his story as in how to tell it.

It passes over us with the full weight of its two hours. Les Biches is a sleeper, that is, it's soporific.

The love of the girls loses its tension and both passions are left unbalanced, leading to the movie's deterioration. [Full Review in Spanish]

The whole film has a sleek, well-fed look to it, as though Chabrol himself were purring with satisfaction at his own dexterity. As well, on the whole, he might.

It's amazing how Raoul Coutard's camera can transform this puerile conceit into a singingly crisp image.

Les Biches, a clearing of the decks for Chabrol, ushered in six years of great filmmaking.

This is top-notch filmmaking by a director who when he is on the mark is as good as anyone in the business.

Audience Reviews for Les Biches (Bad Girls) (Girlfriends) (The Does)

A rich businesswoman (Stéphane Audran) takes a homeless street artist (Jacqueline Sassard) under her wing, and initiates a twisted and deadly ménage-a-trois when her protégée's affair with an architect (Jean-Louis Trintignant) threatens the status quo. Such is Claude Chabrol's mastery at this sort of thing that he is able to reveal latent malice and emotional turbulence without ever once resorting to histrionics, and to create an intoxicating, erotically charged atmosphere without ever resorting to sexual explicitness. Although there's a palpable sense of impending tragedy throughout, I found the climactic 'Epilogue' oddly unsatisfying, lacking the sound, psychological underpinning of "Le Boucher", for example. Both of the female leads are fantastic; Trintignant avoids playing the stereotypical, sleazy seducer, but his character is comparatively underdeveloped and lacks depth. Jean Rabier's photography and Pierre Jansen's score are both outstanding.