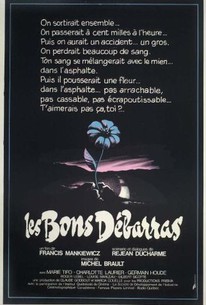 Before his death in 1993, director Francis Mankiewicz was Canadian television's premiere filmmaker. One of his rare theatrical films, Les Bons Debarras, was also among his best (despite its overlength); certainly the judges of Canada's Genie Awards thought so when honoring the film with their "Best Picture" award for 1981. Set amongst a middle-class Quebec family, the film concerns itself with a love triangle, consisting of Charlotte Laurier, Germaine Houde and Marie Tifo. ~ Hal Erickson, Rovi

There are no critic reviews yet for Les Bons débarras (Good Riddance). Keep checking Rotten Tomatoes for updates!

There are no featured audience reviews yet. Click the link below to see what others say about Les Bons débarras (Good Riddance)!