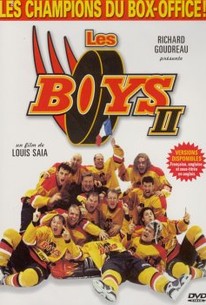 Canada's favorite cinematic hockey team returns in this comedy that features some of Quebec's most popular film and television stars. The film's 1997 predecessor grossed more money than any other French-Canadian film. The sequel begins as Les Boys, a championship amateur Montreal hockey team, flies to France to participate in an international competition in the alpine village of Chamonix. This time, rather than focusing on the team's on-ice hijinks, director Louis Saia spends the first part of the story on the characters as they attempt to cope with the cultural differences between themselves and the native French while also taking time to explore the romances between team lothario Bob and a local girl, and Coach Stan who involves himself with Violette, the owner of a local bistro. The on-ice action picks up when the tournament begins, and Les Boys promptly lose to a rag-tag West African team. ~ Sandra Brennan, Rovi

There are no critic reviews yet for Les Boys 2. Keep checking Rotten Tomatoes for updates!

Now in this one, Les Boys are off to Chamonix for a Hockey tornement. They thought it would be a piece of cake, but a series of misadventures makes them think twice. A hilarious film, Les Boys 2 is just as good as the first one, and has just enough wit to spare. The crude comedy remains, and it's still very funny. If you enjoyed the first one, you'll love this one.