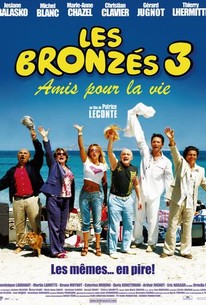 Six of France's greatest screen comedians reunite in this long-awaited sequel to the classic box-office hits Les Bronzes and Les Bronzes Font du Ski. Skirt-chasing Popeye (Thierry Lhermitte) has settled down and married beautiful Graziella (Ornella Muti), and together they run an upscale resort hotel in Sardinia. However, Popeye still has his eye on the ladies rather than the bottom line -- he's carrying on with a beautiful young cook -- and Graziella warns him that he has to stop giving free rooms to his old friends. Unfortunately, this edict comes down just as Popeye's pals arrive, expecting a stay on the house. Jerome (Christian Clavier) was making a fortune as a plastic surgeon until a malpractice suit ended his career; now he hopes to reconnect with his former wife Gigi (Marie-Anne Chazel). However, when Gigi shows up it's clear she's also been seeing a plastic surgeon, and has brought along her new beau, upscale wig salesman Jean-Claude (Michel Blanc). And wealthy and smug Bernard (Gerard Jugnot) and Nathalie (Josiane Balasko) arrive with their dog in tow, though their vacation goes through a rough patch when Bernard makes a potentially disturbing discovery about their son. Les Bronzes 3: Amis Pour La Vie (aka Les Bronzes 3: Friends Forever) was directed by Patrice Leconte, who was also behind the camera for the original two films.

There are no critic reviews yet for Les Bronzés 3: Amis pour la vie. Keep checking Rotten Tomatoes for updates!

This is a joke.