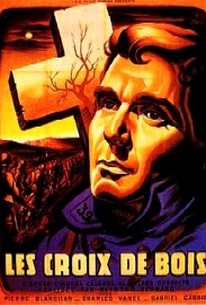 Les Croix de Bois (Wooden Crosses) may well be the most powerful anti-war film ever made; certainly it is the grimmest and most uncompromising. Starting with an impressionistic shot of a gloomy hillside studded with white grave markings, the film delineates the hopelessness and horror of war in such explicit terms that at times it's nearly impossible to watch. Set during WWI, the story concentrates on a handful of French draftees, including an idealistic student named Demachy (Pierre Blanchard). Marching off to war with joyful patriotic fervor, the men are quickly disillusioned by the appalling realities of total warfare. When they aren't enduring ten nonstop days of enemy bombardment, the soldiers must sweat out the horrible realization that their trenches are being mined from underground. Nor are they given any relief during those rare lulls in fighting. At one point, the men are yanked away from a much-needed furlough to march in a victory parade for the entertainment of their callous, fat-cat superior officers. One by one, the men are killed off, until only Demachy remains -- but, tragically, not for long. Such was the impact of Les Croix de Bois, that, when it was shown on French television in the 1970s, a WWI survivor who watched the film for the first time was so overwhelmed by despair that he committed suicide. Generous portions of the film's battle sequences were later incorporated in the 1934 John Ford film The World Moves On and the 1936 Howard Hawks production The Road to Glory. ~ Hal Erickson, Rovi

Countless films declare 'war is hell', but few do so with as much bitter veracity as Wooden Crosses.

No matter how well intentioned socially conscious movies may be, they have a tendency to age very badly due to societal norms constantly shifting.(So, relax, those of you who hate "Crash."(2005)) For example, look at the topic of gay marriage. Were we even discussing this ten years ago? War in all of its lunacy and immense waste of human life is sadly the exception. And that is even taking in consideration how much warfare has changed since the gritty "Wooden Crosses" was made in 1932. It starts on a giddy note, as the French populace is excited at the prospect of going to war against Germany in World War I. The movie focuses on one of the enlistees, Gilbert Demachy(Pierre Blanchar), a law student, as he fights alongside a group of other soldiers. As time wears on, their high spirits wane as conditions get increasingly worse and the casualties mount. Oh and did I mention the lice? That is nothing compared to the knocking the soldiers hear which can only mean the Germans are tunneling under them to place a mine. As bad as that may sound, I have rarely seen anything as agonizing as the ending. There can be little worse than that. (Originally reviewed in the blog section on February 27, 2009.)