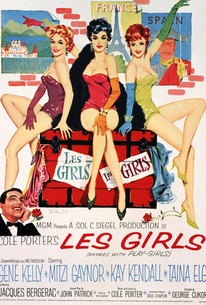 Les Girls is the Rashomon of MGM musicals. The film is told in flashback, as Mitzi Gaynor and Taina Elg, two-thirds of a popular cabaret trio, attempt to legally block the third, Kay Kendall, from writing her memoirs. Each of "Les Girls" has her own interpretation of the group's previous professional and amorous escapades. To make sense of these wildly diverse recollections, the court must rely upon a fourth party to straighten things out. Enter Gene Kelly, the dancing star who organized "Les Girls" in the first place. But can Kelly be believed? The "truth" of the many reminiscences in Les Girls is secondary to the dazzling beauty of its female stars, and to the delightful musical numbers, the best of which is an extended Marlon Brando parody titled "Why Am I So Gone About That Gal?" This was Gene Kelly's last musical effort for MGM, the studio he joined way back in 1943; the film was the inspiration for the short-lived 1963 TV series Harry's Girls, which starred Larry Blyden, Susan Silo, Dawn Nickerson and Diahn Williams.

Richard Alexander
as Stagehand
View All

Les Girls is an exceptionally tasty musical morsel that is in the best tradition of the Metro studio.

A delight to match that other Cukor musical, A Star Is Born.

While Gene Kelly's hoofing remains delightful, he delivers only a half-hearted performance in a rather sketchy role. It's Kay Kendall who steals the show with a highly amusing turn.

The results are full of charm and sparkle, and Cole Porter's songs are worthy of his name.

Uneven musical, at best in its first third.

There are no featured audience reviews yet. Click the link below to see what others say about Les Girls!