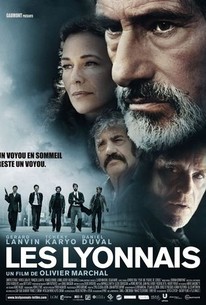 The enduring friendship between two notorious criminals is put to the ultimate test in this sprawling crime saga based on the memoirs of gangster Edmond Vidal and directed by Olivier Marchal (MR 73). Edmond Vidal (aka Momon) grew up in an impoverished Gypsy camp. As a result, loyalty, pride, and family were his greatest values. As a child, Vidal established a powerful bond with Serge Suttel when they were arrested for stealing cherries. Years later, Momon and Serge teamed up to form the Gang Des Lyonnais, who gained notoriety throughout the 1960s and early-'70s for a brazen series of armed heists executed in and around the city of Lyons. But it all came to an end when Serge was arrested in 1974. Faced with the prospect of languishing in a prison cell, Serge served his time as repentant Momon settled down to enjoy a peaceful retirement. A beloved husband, respected father, and cherished grandfather, kind-hearted Momon devoted his life to his family until the day his dark past returned with a vengeance. Now, as Momon prepares to break his sworn brother out of prison, the discovery that Serge is saddled with some unpaid debts casts a dark shadow over their lifelong friendship and proves that like a bullet, the past will always catch up you. Gerard Lanvin, Tcheky Karyo, and Daniel Duval star.

Lacking in depth and style.

An easy film to fall for -- it's slick, proficient and has just enough depth to lift it above your average, humdrum crime drama.

There are just too many moments of déjà vu to truly satisfy.

A decent thriller with a notable performance from newcomer Dimitri Storoge as the young Momon.

There are no featured reviews for Les Lyonnais (A Gang Story) at this time.