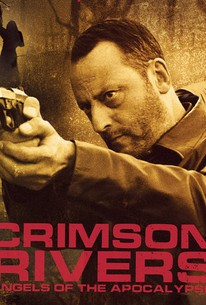 French filmmaker Olivier Dahan directs the crime thriller sequel The Crimson Rivers II: The Angels of the Apocalypse, with a script by Luc Besson inspired by the novel Les Rivières Pourpres by Jean-Christophe Grange. Jean Reno returns as veteran police detective Pierre Niemans. He is sent to the Lorraine region of France to investigate a creepy monastery, where his team discovers a dead body hidden in the walls. Meanwhile, police captain Reda (Benoît Magimel) accidentally hits Jésus (Augustin Legrand) with his car, leading to another encounter with a killer monk. Niemans and Reda get together with religious expert Marie (Camille Natta) for the supernatural investigation. Christopher Lee appears in a cameo role.

...ultimately fares a whole lot worse than its convoluted yet engaging predecessor...

It's both bone-chilling and tremendously thrilling. A brilliant and fast paced, edge of your seat action-thriller with an amazing twist that will blow you away. Just as good as the original. It's stylish, explosive, riveting and relentlessly exciting. A pulse-pounding, well-crafted and electrifying thrill-ride. This is one awesome movie. Bursting with amazing action and great chases. Suspense is intense dosages. A heart-pounding adrenaline rush that kicks serious ass all the way to the end. It's The Da Vinci Code on steroids. Jean Reno never ceases to impress with another great performance.

The cinematography is once again well done and Jean Reno is once again pitch perfect in his role but there's not a whole lot going on in this rather uninspired sequel. The absence of Vincent Cassel doesn't help either.

Just as good as Crimson River I, Another full action Drama, Non Stop, Jean Reno is what makes this film so great and can't wait and hope for a Crimson River 3. This one opens with Jean sitting in his living room minding his own business when he gets up to find remote for TV, and a Car drives through his house. Man what a house. Anyway his friend is inside the car along with a beautiful Russian Doll, so starts the action packed Movie. After removing his friend and putting him in an ambulance he finds out from the girl you can't leave the car for once you get 50 meters from car, the bracelet on your arm explodes and makes you into burger meat. Chase scenes alone worth 5 stars So that?s what I have to give this one.