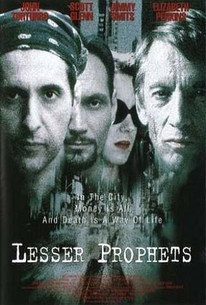 A strong cast highlights this tough-minded urban drama. Police have been unsuccessful in making a case against three small-time bookmakers they've been following, but luckily a cop named Iggy (Scott Glenn) happens to catch up with Jerry (George DiCenzo), one of the bookies. Instead of arresting him, he demands money; his brother was deep in debt to the bookies, and the pressure drove him to suicide. Meanwhile, a neighborhood character named Leon (John Turturro) brings the bookies a tip on a bet he's convinced will be a sure winner. Needing to raise some quick cash, Jerry and his buddies Charlie (Michael Badalucco) and Ed (John Spencer) take Leon's advice, but live to regret it. Lesser Prophets also features Elizabeth Perkins, Jimmy Smits, and Amy Brenneman.

However, there are no surprises, there is no intrigue and everything turns out more aggravating than entertaining.

There are no featured audience reviews yet. Click the link below to see what others say about Lesser Prophets (The Last Bet)!