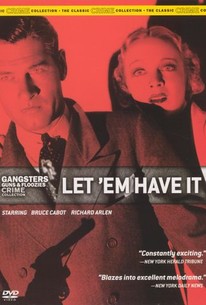 Let 'em Have It Photos

Producer Edward Small's Let 'Em Have It is one of the best of the "Feds vs. Outlaws" film cycle of the mid-1930s, which included such similarly-titled efforts as Don't Turn 'Em Loose, Show Them No Mercy and Muss 'Em Up. Virginia Bruce stars as Eleanor Spencer, a foolish debutante who refuses to believe that her chauffeur Joe Keefer (Bruce Cabot) was in on a plot to kidnap her. But federal agent Mal Stevens (Richard Arlen) is on to Keefer from the outset and intends to give the thug enough rope to hang himself. Sure enough, Keefer soon repays Eleanor's confidence in him by embarking on a bloody crime spree, leading to the inevitable shootout between the villains and the good guys at a remote woodland hideout (obviously inspired by the assault on John Dillinger's hideaway in Northern Wisconsin). The film's justly famous dramatic highlight occurs when the fugitive Joe Keefer awakens from plastic surgery, only to discover that the vengeful doctor has permanently "branded" Keefer's face with the crook's initials!

Richard Hemingway
as Fuller
View All

Critic Reviews for Let 'em Have It

More underworld life, with plenty of excitement and some educational notes on crime detection which should teach criminals not to leave gloves, shoes, and especially, half-eaten apples, behind them.

Audience Reviews for Let 'em Have It

There are no featured audience reviews yet. Click the link below to see what others say about Let 'em Have It!

Let 'em Have It Quotes