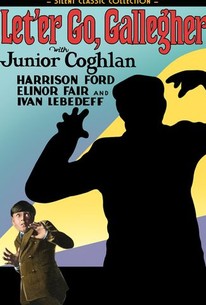 Long before Richard Harding Davis' "Gallegher" stories were serialized for television by Walt Disney, popular silent-screen juvenile actor Frank Coghlan Jr. played the title role in Let 'Er Go, Gallegher. A street urchin who aspires to be a detective, Gallegher (Coghlan) gets more than he bargained for when he witnesses a murder. Though he doesn't see the killer's face, he knows that the culprit had only four fingers on one hand. Gallegher passes on this information to hotshot newspaper reporter Callahan (Harrison Ford), who rises to journalistic fame when the boy's scoop hits the headlines. Unfortunately, Callahan's newspaper runs a picture of Gallegher, billing the boy as the sole witness to the crime. In due time, the young scamp is kidnapped by the murderer, Four Fingered Dan (Ivan Lebedeff). Just as Dan is about to remove Gallegher's head from his body, the boy is rescued by Callahan and virtually the entire New York police force. Outside of the "Boy's Own Paper" plotline, the real selling angle of Let 'Er Go, Gallegher was an extended sequence in which the 12-year-old hero mans the controls of a car, only to find himself wedged between two speeding fire engines!

E.H. Calvert
as The City Editor

There are no critic reviews yet for Let 'Er Go, Gallegher. Keep checking Rotten Tomatoes for updates!

There are no featured reviews for Let 'Er Go, Gallegher at this time.