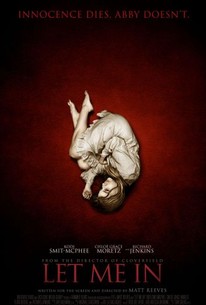 Critics Consensus: Similar to the original in all the right ways -- but with enough changes to stand on its own -- Let Me In is the rare Hollywood remake that doesn't add insult to inspiration.

Critics Consensus: Similar to the original in all the right ways -- but with enough changes to stand on its own -- Let Me In is the rare Hollywood remake that doesn't add insult to inspiration.

Critic Consensus: Similar to the original in all the right ways -- but with enough changes to stand on its own -- Let Me In is the rare Hollywood remake that doesn't add insult to inspiration.

Let Me In Videos

Let Me In Photos

Twelve-year old Owen is viciously bullied by his classmates and neglected by his divorcing parents. Achingly lonely, Owen spends his days plotting revenge on his middle school tormentors and his evenings spying on the other inhabitants of his apartment complex. His only friend is his new neighbor Abby, an eerily self-possessed young girl who lives next door with her silent father. A frail, troubled child about Owens's age, Recognizing a fellow outcast, Owen opens up to her and before long, the two form a unique bond. When Abby's father disappears, the terrified girl is left to fend for herself. Still, she rebuffs Owen's efforts to help her, leading the imaginative Owen to suspect she's hiding an unthinkable secret.

Richard Jenkins
as The Father

Elias Koteas
as The Policeman

Gwendolyn Apple
as Girl in Pool

News & Interviews for Let Me In

View All Let Me In News

Critic Reviews for Let Me In

Cloverfield director Matt Reeves has been charged with filling Alfredson's considerable boots, and he does a fine job of not steering too far from the original, while also putting his own stamp on the vampire tale.

Exploring the world of good and evil is a common theme in cinema, but few have been able to create such a fine line between the two as cleverly done in Let Me In.

Let Me In doesn't need to exist unless, that is, the very notion of Swedish cinema is strange and unpalatable to you.

As far as remakes go, this is a pretty good one.

Let Me In is one of the few horror films that will trouble you long after the credits roll.

With its mix of true-blood romance and full-moon madness, Let Me In should hasten the twilight of the twerpy pretenders.

It's even better if viewers haven't seen the original.

The film will undoubtedly prove satisfying to those who profess to be hardcore fans of the sub-genre of vampire flicks.

A definitely well made remake that manages to gain its own agenda of horror, shock value and final quality. [Full review in Spanish].

The actors in Let Me In are phenomenal across the board.

This weekend, make sure to get yourself in to the nearest theatre for Let Me In.

It is impossible not to watch the film on only a humanistic level but as an allegory of a time and era where discontent sucked the lifeblood out of families.

Audience Reviews for Let Me In

It's a good story and film, I saw the Swedish version first, so kinda spoils any surprises, as it is a scene for scene re-work. In fact I'd say some of the key scenes were better in the original version. Why they added some dodgy cgi in places is anyones guess? Have to say Chloe Moretz is one to watch for the future, great young actress.

Being a Hollywood remake of an independent foreign film, Let Me In is more mainstream than the original, but has enough similarities with the original to maintain the high quality present in the original. Acting wise, this film is at least on par or even a little better than the original, but the minor changes to the story take a little bit of the bite the original had out of the equation. Visually, this film is superior to the original thanks to a bigger budget. The special effects are better (a horrible cat scene from the original sticks out like a sore thumb as much better in this film) and the gore is more realistic. Other than that, they are basically the same. I really liked both versions of the film and both have elements that are better done in each version, but I would give just a very slight edge to the original for not taking out the main context of the story and sticking to its guns. Both versions are very much worth watching and some of the better horror movies of the past decade.

A vampire romance movie that is actually a real vampire movie. Solid in every form. One of the few times I have watched a remake of a foreign film and have to say they did a quality job. An all around quality flick.

Let Me In Quotes