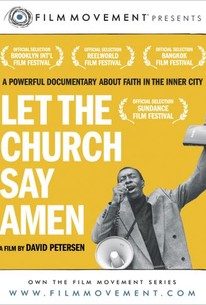 Academy Award-nominated filmmaker David Peterson directs the documentary Let the Church Say Amen. The World Missions for Christ Church exists inside a small storefront in Washington, D.C. While the city government lacks funds and power, this little church reaches out to make necessary, positive changes in the community. Homelessness, violence, and drug addiction are all faced head-on by the church members, as missionaries seek out those who have been left behind by poverty and injustice. Peterson presents faith as a force of hope and inspiration within a crumbling, neglected city. Let the Church Say Amen premiered the 2003 SilverDocs Documentary Film Festival and screened at the 2004 Sundance Film Festival as part of the American Spectrum competition.

follows Rev. Bobby Perkins and a handful of his congregation for two years as they strive to overcome their environment and achieve their dreams

...an uneven yet sporadically compelling documentary...

There are no featured audience reviews yet. Click the link below to see what others say about Let the Church Say Amen!