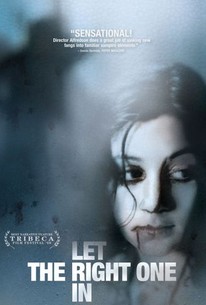 Critics Consensus: Let the Right One In reinvigorates the seemingly tired vampire genre by effectively mixing scares with intelligent storytelling.

Critics Consensus: Let the Right One In reinvigorates the seemingly tired vampire genre by effectively mixing scares with intelligent storytelling.

Critic Consensus: Let the Right One In reinvigorates the seemingly tired vampire genre by effectively mixing scares with intelligent storytelling.

Let the Right One In Photos

A 12-year-old boy befriends a mysterious young girl whose appearance in town suspiciously coincides with a horrifying series of murders in director Tomas Alfredson's adaptation of the book by author John Ajvide Lindqvist, who also wrote the screenplay. Oskar is a young boy who can't seem to shake off the local bullies, but all of that begins to change when a new neighbor moves in next door. After striking up an innocent friendship with his eccentric next-door neighbor, Oskar realizes that she is the vampire responsible for the recent rash of deaths around town. Despite the danger, however, Oskar's friendship with the girl ultimately takes precedence over his fear of her.

Per Ragnar
as Håkan

Adam Stone
as Policeman in Classroom
View All

News & Interviews for Let the Right One In

View All Let the Right One In News

Critic Reviews for Let the Right One In

Sinister but gorgeous and compelling.

A remarkably moving horror tale, about a pale, bullied twelve-year-old boy (Kåre Hedebrant) and his first love (Lina Leandersson), who happens to be a vampire.

Lovelier than most bloodsucker flicks, but it doesn't quite transcend its well-chewed genre.

The film is peculiar in all the ways it should be, and it's one that is exquisitely imagined. By the time the credits roll, Let the Right One In really sinks its fangs in, and you are happy it did.

Production values are pretty good: everything looks believably "eighties", the snowscapes of Sweden look mighty fine and everything is underscored by a suitably moody soundtrack.

Beautifully made and exquisitely realised by all involved, this is a remarkable movie that redefines horror film-making and deserves to reach as wide an audience as possible.

This is not your typical blood-and-guts horror film...the heart of Let the Right One In is the friendship between Oskar and Eli. Despite Eli's vampirism, this relationship feels realistic.

A beautiful, enchanting gothic fable that is at once strangely charming and unabashedly macabre.

A tale of how damaged people forge connections, how they learn to survive and, ultimately, where they find genuine love.

Audience Reviews for Let the Right One In

Let The Right One In succeeds in transcending the vampire genre onto a new light, creatively giving depth through characterization and through an intelligent and slow-paced yet riveting narrative.

A twelve-year-old boy befriends the vampire who lives next door. Slowly paced and atmospheric, this is not a typical vampire film. The children provide an interesting take on the vampire genre, and there is more than enough creepy scenes that might please a horror fanatic. However, the film's pace was often too slow for me, and the exposition was too long. Also, I thought the school bullies were unrealistically sadistic. They seemed like the adult sociopaths whom I've tired of in movies of this ilk. Overall, I liked Let the Right One In and am generally impressed by Swedish cinema, but I can't say that I was in the film's thrall, so to speak.

I have to admit I watched this film, knowing nothing about it at all and had I known it was a vampire film, perhaps I wouldn?t have watched it with the same enthusiasm, however this is the most naturally acted Vampire film that I've seen to date. Two fantastic child leads and the storyline came across more like a genuine murder tale. Slightly stretched out in parts, but most certainly worth the watch. The accompanying music is simply beautiful.

Let me shoot this right off the bat: "Let the Right One In" is one impeccably well made movie. Spectacular. The best vampire movie to ever be made. It's a much more methodically paced thriller that slowly but smartly eases tension that is to be found in only a few films nowadays. And when it gets tense, man, you're freezing up. "Let the Right One In" is masterfully directed; it does everything right -- whether it's the Stanley Kubrick-esque style of cinematography to the perfect pacing to the melancholy magic between the two main characters, this is what films are all about. The two lead characters deserve a standing ovation -- it's not only the tone that the movie gives off that accentuates the actors' performances or the great screenplay, but it simply comes down to the superb acting that makes their chemistry so unique. There are some wildly outstanding scenes that deserve recognition for it rivals with masterpieces. I loved how the movie is grounded in realism and how though its premise is mysterious in the universe it's placed in, it doesn't reveal too much. It's focus is on the relationship. As you can tell, I absolutely loved this movie. It is superb on every level -- technically and emotionally. "Let the Right One In" is an exceptional film that rightfully deserves the praise its been getting for everything within it is masterfully crafted to perfection.

Let the Right One In Quotes