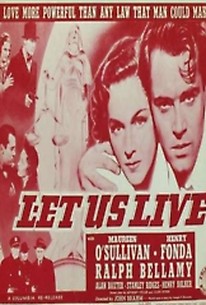 Despite its comparatively upbeat ending, Let Us Live is one of the darkest and gloomiest films of the late 1930s. As working stiff Brick Tennant, Henry Fonda is once more cast as a misunderstood victim of society. Held up during a robbery-murder, Brick is himself convicted of the crime on the basis of circumstantial evidence and faulty eyewitness testimony. The authorities remain unsympathetic to the hero's plight throughout, automatically assuming that just because he's poor he's likely to be a killer. Only his sweetheart Mary Roberts (Maureen O'Sullivan) believes in Brick's innocence, and it is she who sets the wheels in motion for the ultimate capture of the genuine culprit, a scant few minutes before Brick's "long walk" to the electric chair. Based on Joseph F. Dineen's Murder in Massachusetts, the real-life story of a near-fatal miscarriage of justice in 1934, Let Us Live refuses to compromise its pessimistic tone with a phony "all smiles" fadeout. ~ Hal Erickson, Rovi

Henry Kolker
as Chief of Police

Critic Reviews for Let Us Live

It's one of those familiar race against time thrillers to save an innocent man from the electric chair.

What Brahm brings to the film is a terror born of official indifference... and he turns the race to stop the execution into a battle with bureaucracy.

There are no featured reviews for Let Us Live at this time.